DPReview have a hands on preview of the new Canon 450D DSLR! Specs look impressive, and as the Canon 400D is still being manufactured and sold I’m sure there’ll be some great deals on the older camera.

They also have a report listing what has changed since the Canon 400D. 12MP sensor, spot metering, 3″ LCD, auto lighting, something called highlight tone priority and more. Are you tempted yet? Must keep credit card in wallet …

No, I’m not that tempted. The Canon 20D will do me for at least another year! (via Treasa)

On Saturday I took my Canon 20D into a camera shop here in Cork and asked how much they’d give for it as a trade in against a Canon 40D.

After a few minutes I found out the disappointing answer. €300. Depreciation is a bitch isn’t it? The Canon 40D body is €1200 here. I need to start saving.

In other camera news, the M/AF switch on my wide angle Sigma lens fell off! I noticed it gone this afternoon and can’t find the switch anywhere. Hopefully it won’t be too expensive to replace.

Leaked photos of the the as yet unreleased Canon EOS-0 have surfaced on the ‘net and are sure to make their way around all the usual blogs in no time but I got my hands on them early just for you.

Details are sketchy but from the photos it appears to come in different lens mount flavours to support Nikon, Olympus, Sony and Sigma as well as the usual Canon EOS mounts. The inspiration button should come in handy for all those tired hacks who are too bored with their “yet another school fete” assignments.

Coming around to the back of the camera, Canon have filled every square inch with new functionality and a super wide touch screen. I can just hear the Apple iPhone owners gasping with delight. I’m not so sure about running Windows Vista on it. Can I put Ubuntu Linux on it? Is that Photoshop running on it? I would like to see Walter run Pixenate on there if the new camera has wireless support. Tom reports it works on the Apple iPhone and Walter has created a Facebook photo editor out of it so I don’t see why not.

I think Mike Johnston may require breathing space and a respirator when he hears that this new Canon camera is the first to have a built in image stabilizer. In camera image stabilization is one of his pet loves and I’m sure he’ll be signing up to buy one. Exciting times!

Other notable features are the three hard drives, the HDR function and the capability to shoot ISO 12800. Hopefully they’ve solved the noise problems! I’m not sure if I’ll use the TV feature but I’d happily listen to the radio or MP3s while out shooting. Should be plenty of capacity on all those drives.

Roland has posted a fairly exhaustive Canon 40D review on his blog. It made the front page of WordPress.com which is where I found it. Must resist temptation …

Amazon have it in stock. Still a bit pricey but maybe after my accountant does her thing with my finances I’ll know if I can afford it!

So, it appears that the Canon 40D is on it’s way with an expected release date in early September if the rumours are to be believed. This post about the 40D sent me to gizmodo who quote the non-Canon site, canon-eos-40d.com, when they list the rumoured specs of the Canon 40D. They haven’t changed much since the last time I blogged about these rumours.

There’s nothing there that would tempt me to upgrade. When buying a new camera, I’ll either “downgrade” to a Canon 400D, or consider a new Canon 5D. I’d choose the 400D because all my lenses will work fine with it, and it’s really not that much different in capabilities to my 20D. If I went down the route of using the Canon 5D, I’d have to replace several lenses. Only my Canon 50mm f/1.8 and Canon 75-300mm will work properly with the new full size sensor.

All of that presumes I have the spare cash to replace an almost perfectly working 20D and that I can justify the upgrade. I don’t, and I can’t. Oh well.

Even Amazon have leaked details of the Canon 40D according to DPS! Those specs look more and more likely as time goes by. Could Canon be leaking this stuff?

Digital Photography School have finished their series on tripods and monopods by listing some alternative products and ideas. I have three tripods, two are bulky, one of those is fairly heavy and the other is a small 6 inch high one that fits in my camera bag. The small one gets the most use as the other two are either at home or in the car when I need more stability.

He forgot one alternative, the string tripod which is assembled from a length of string and a bolt small enough to fit the tripod mount socket on a camera. It’s also called a chain tripod. Simply screw the bolt into your camera, stand on the other end of the string and hold the camera to your eye making sure the string is taut. Sources say you’ll get 2 stops extra or shoot at 1/8 sec which is quite impressive. What’s more, it’s a lot more portable than any other tripod or monopod. I really must do some testing and see just how well it works.

The rest of the DPS tripod series is worth a read too:

I splashed out on Monday afternoon on a Sigma 10-20mm F4.0-5.6 EX DC HSM in O’Leary’s Camera World. Prices are good at around 499 Euro, comparing well with those I found at Pixmania and elsewhere online. Sigma are based in Bandon, Co. Cork and I guess that helps to keep distribution costs down.
First impressions? It’s wide! It’s also distorted but that’s to be expected. Chromatic aberration is kept to a minimum although I haven’t looked too closely for it. It produces nice crisp images and saturated colours!
While walking around town I found that 10mm is almost too wide. I can be almost on top of my subject before shooting which can be a little nerve wrecking considering the loud click of the 20D! I have captured some great street shots with it already, some of which I’ll post over the next few days.

I couldn’t find many reviews but a number of print magazines have reviewed it and given it glowing recommendations. This thread by Jamison Wexler points to a gallery of example images. This picture reminds me that it’s great for taking self portraits when you really don’t want to ask someone to take the photo!
Now, if only my Sigma 18-200mm was a real 18-200..

While on holiday in Lanzarote I found a shop that sold this lens for 389 Euro. The shop is Visanta and is listed as the main Sigma dealer in the Canarys. You can’t trust all the small electronic shops selling fakes, but Visanta are ok. There are dodgy looking guys hanging about outside the tourist traps but Visanta staff were very helpful and professional.
Unfortunately they didn’t have the lens in stock. Of course, if you buy over there, you should declare it when you get home. The islands are a duty free zone but you’re only allowed to bring home goods below a certain value without paying that duty AFAIR.

This is a bit of a let down to be honest. The new 30D looks nothing like the leaked photo I found a while back. There are a couple of new features, most notably the bigger LCD screen, spot metering and a much bigger buffer but I don’t see any point in upgrading from my 20D. I was looking forward to seeing the ADAMS MODE button but alas, it’s probably not going to see the light of day for some time yet.
The really good news is that it’s the same price as the 20D which should force the price of existing 20D bodies down. Look for discounts at your favourite online retailer. If you see it at a bargain price, buy it! (via and every other photography news site)

On a related note, I weighed my Canon 20D and Sigma 18-200 lens. It’s a monster 1.25kg (or almost 3lbs)! No wonder I hurt my back last year. Carrying that amount of weight around one’s neck is a sure fire way of getting to know your physiotherapist better!

Welcome members of Dropzone.com! I hope you’ll look around and enjoy the photos!

Wow! I thought the 20D would do me for a couple of years, but after seeing this photo of the upcoming Canon 30D I want one! Looks like it’ll do everything but make the coffee for you! (via) 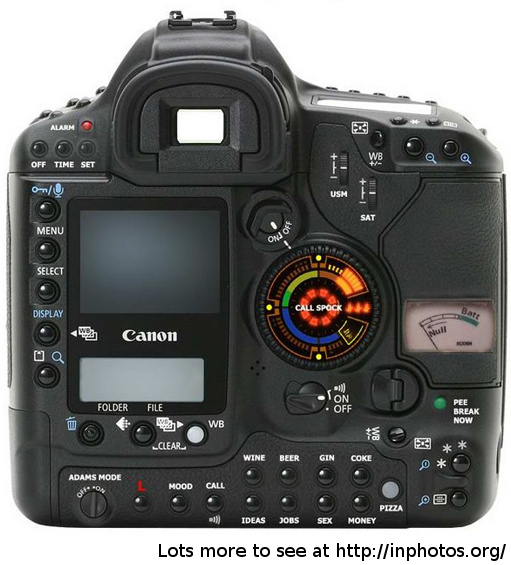 Later… Looks like the real Canon 30D is out. I don’t think I’ll be rushing out to buy it as it appears to be only a minor upgrade. More here!

Or to put it more clearly, why entry level digital SLRs are better than their similarly priced competition in the bridge camera range.
As usual, Paul writes very well on a topic that will probably have many people juggling with choices this Christmas: buy a DSLR or an SLR look-a-like digital camera.
I have to say, I think I have the best of both worlds, in my Panasonic FZ5 I have a small camera that fits neatly into one hand, can be sneaked into concerts, is light enough that I can bring it everywhere and is perfect for taking photos for web publication. My Canon 20D is a bigger beast but nonetheless is never at home but rarely goes into a pub or anywhere dangerous! (Well, almost never!)

Go read his article if you’re contemplating a purchase.