Yes, yes, boo hoo, oh woe is me, my Canon 40D arrived on the day the new Canon 50D was announced. If only I had waited, my photos would be so much better with the Canon 50D.

Yeah right. I’ve already stated before that the equipment behind the camera is the most important part of image making. Sure, the camera does matter, but DSLRs are getting to the stage PCs got to a few years ago. Upgrading doesn’t significantly change the game. I’ll upgrade again in maybe 3 years. No rush.

The Canon 50D looks sweet though. 15MP sensor, better ISO, better LCD. Nice upgrade. Roland has linked to a few of the sites previewing or discussing the Canon 50D. The Rob Galbraith page is probably the most readable, but the DPReview preview has a neat comparison table to compare the Canon 50D with the Canon 40D.

DIGIC 4 processor Canon’s next-generation, 14-bit DIGIC 4 processor see its debut in the 50D, and it offers both more functionality and about 30% faster processing speed than the DIGIC III processor in the 40D….

The two cameras’ dimensions, body style and control positions are also the same (though the 50D is fractionally lighter). In a nutshell, the 50D appears to be a 40D with a higher-resolution sensor, revamped image processing, faster CompactFlash write speeds, HDMI video out and a crisp new rear LCD.

Love this pic of the motherboard with the DIGIC 4 processor!

DPReview have a hands on preview of the new Canon 450D DSLR! Specs look impressive, and as the Canon 400D is still being manufactured and sold I’m sure there’ll be some great deals on the older camera.

They also have a report listing what has changed since the Canon 400D. 12MP sensor, spot metering, 3″ LCD, auto lighting, something called highlight tone priority and more. Are you tempted yet? Must keep credit card in wallet …

No, I’m not that tempted. The Canon 20D will do me for at least another year! (via Treasa)

On Saturday I took my Canon 20D into a camera shop here in Cork and asked how much they’d give for it as a trade in against a Canon 40D.

After a few minutes I found out the disappointing answer. €300. Depreciation is a bitch isn’t it? The Canon 40D body is €1200 here. I need to start saving.

In other camera news, the M/AF switch on my wide angle Sigma lens fell off! I noticed it gone this afternoon and can’t find the switch anywhere. Hopefully it won’t be too expensive to replace.

Leaked photos of the the as yet unreleased Canon EOS-0 have surfaced on the ‘net and are sure to make their way around all the usual blogs in no time but I got my hands on them early just for you.

Details are sketchy but from the photos it appears to come in different lens mount flavours to support Nikon, Olympus, Sony and Sigma as well as the usual Canon EOS mounts. The inspiration button should come in handy for all those tired hacks who are too bored with their “yet another school fete” assignments.

Coming around to the back of the camera, Canon have filled every square inch with new functionality and a super wide touch screen. I can just hear the Apple iPhone owners gasping with delight. I’m not so sure about running Windows Vista on it. Can I put Ubuntu Linux on it? Is that Photoshop running on it? I would like to see Walter run Pixenate on there if the new camera has wireless support. Tom reports it works on the Apple iPhone and Walter has created a Facebook photo editor out of it so I don’t see why not.

I think Mike Johnston may require breathing space and a respirator when he hears that this new Canon camera is the first to have a built in image stabilizer. In camera image stabilization is one of his pet loves and I’m sure he’ll be signing up to buy one. Exciting times!

Other notable features are the three hard drives, the HDR function and the capability to shoot ISO 12800. Hopefully they’ve solved the noise problems! I’m not sure if I’ll use the TV feature but I’d happily listen to the radio or MP3s while out shooting. Should be plenty of capacity on all those drives.

I received an email yesterday from Bibble Labs. They’ve updated their very popular raw converter to support the Canon 40D. Could they be the first to market with that support? I don’t know, but the new version is free for existing users and it’s a simple upgrade.

Go try out the time limited trial version if you’re itching to play with your new camera’s RAW files!

Roland has posted a fairly exhaustive Canon 40D review on his blog. It made the front page of WordPress.com which is where I found it. Must resist temptation …

Amazon have it in stock. Still a bit pricey but maybe after my accountant does her thing with my finances I’ll know if I can afford it!

So, it appears that the Canon 40D is on it’s way with an expected release date in early September if the rumours are to be believed. This post about the 40D sent me to gizmodo who quote the non-Canon site, canon-eos-40d.com, when they list the rumoured specs of the Canon 40D. They haven’t changed much since the last time I blogged about these rumours.

There’s nothing there that would tempt me to upgrade. When buying a new camera, I’ll either “downgrade” to a Canon 400D, or consider a new Canon 5D. I’d choose the 400D because all my lenses will work fine with it, and it’s really not that much different in capabilities to my 20D. If I went down the route of using the Canon 5D, I’d have to replace several lenses. Only my Canon 50mm f/1.8 and Canon 75-300mm will work properly with the new full size sensor.

All of that presumes I have the spare cash to replace an almost perfectly working 20D and that I can justify the upgrade. I don’t, and I can’t. Oh well.

Even Amazon have leaked details of the Canon 40D according to DPS! Those specs look more and more likely as time goes by. Could Canon be leaking this stuff?

Engadget has photos of the new Canon 5D Mark II. Unfortunately they’re fake but it gives me another reason to post this image blogged ages ago as a possible leaked photo of the new Canon 30D. I must admit, it would be nice to have an “Adams mode” on my next camera.

I’m looking forward to seeing a new Canon 5D appear. It might bring the current model down to a more reasonable level for us amateurs at this expensive hobby.

Should I add a “Rumour Mill” category? The Digital Photography Show reports that a Canon 40D may be on the way. Digital Photography Blog posted links to Canon’s website, but those pages have changed to Canon 400D pages! Speculation about features includes the following:

We’re hearing a lot of different rumors and guesses about the Canon EOS 40D specifications.

Among common guesses include that it will have anti-dust features, DIGI III and either a 10.2 or a 12 megapixel sensor.

I would love if the new camera had anti-shake features built into the camera but that will never happen. Canon charge a huge premium for their Image Stabilizer lenses. Why kill off a cash cow?

Will the Canon 40D be as revolutionary as the 20D? Sounds like upgrade time…

Chris Garrett speculates that the Canon 6D will be announced in February. Time will tell, but what extra features will it have and will they be worth the premium a camera demands?

If I didn’t have a good collection of APS-C lenses already I might be tempted to go out and buy a Canon 5D, especially if it’s being discounted. Tempted if I had wads of cash falling out of my pockets that is and not budgeting for a new arrival in April! “But honey, I really want to take the best possible pictures of our baby!” Has that ever worked?

Whatever happens, I’m sure I’ll be lusting after a new camera before long.

Have you seen the price reductions on the Canon 5D lately? This is usually a good signal that a replacement is coming. All the hot news of late has been in the APS-C area, suspiciously quiet if you ask me. You could say that would mean a new flagship is required but if I was Canon I would announce a 1D beating 6D, then top it with a new top end pro unit. The other way round makes less sense to me. 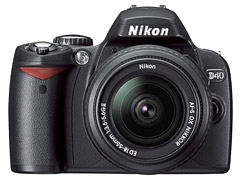 The recently announced Nikon D40 could be the camera that wins over the hearts and minds of a whole new generation of DSLR owners and it’s being released right before the Christmas buying season.

Why? For two reasons, price and brand. There are a number of digital SLR cameras in the sub $500 range; the Pentax K100D and Olympus E300 among them but the Nikon brand of digital cameras is better known. Canon don’t have any current camera to compete at this price range, yet.

What camera will parents buy their offspring this Christmas? The more expensive Canon 400D or the Nikon D40? I think it’s a no-brainer which camera they’ll buy. The Nikon is the perfect “starter camera” for junior. It’s relatively cheap, looks professionally black, makes the click sound when you take a photo like “real cameras” do and you can use other Nikon lenses. What is there not to like?

Well, the Nikon D40 is great but for the price there have been compromises made. The DP Review preview of the camera compares it favourably to the Nikon D50, emphasising the extra features the cheaper camera has. The biggest drawback is an issue with lenses. It can’t auto-focus with traditional Nikon lenses because it doesn’t have an internal focus drive motor. This is arguably worse than the Canon limitation on EF-S lenses. At least Canon EF-S cameras can take advantage of proper Canon lenses.

Perhaps the biggest negative on the D40 is that it doesn’t have an internal focus drive motor and hence no mechanical focus drive pin, instead it only has CPU contacts which means it can only Auto Focus with AF-S and AF-I lenses (those with built-in focus motors). Indeed our ‘standard’ lens the Nikkor 50 mm F1.8D (and the F1.4D) are manual focus only on the D40. The images below show the difference between the mount on the D40 and D80, the D80 has a mechanical focus drive pin at about the 7 o’clock position.

Canon need a sub-$500 DSLR to compete. Once you’re hooked on a brand of camera it’s much easier to stick with that brand. The controls will be familiar, you can use the same lenses, you visit the same online discussion boards.

Personally, I think it’s great that DSLR technology is so cheap. It’s not that long ago that the only digital SLR was priced beyond the budgets of anyone but the professionals. Isn’t Moore’s Law great?

Ken Rockwell has a great review of the Nikon D40. I think he likes it:

Super-duper light weight = too much fun!