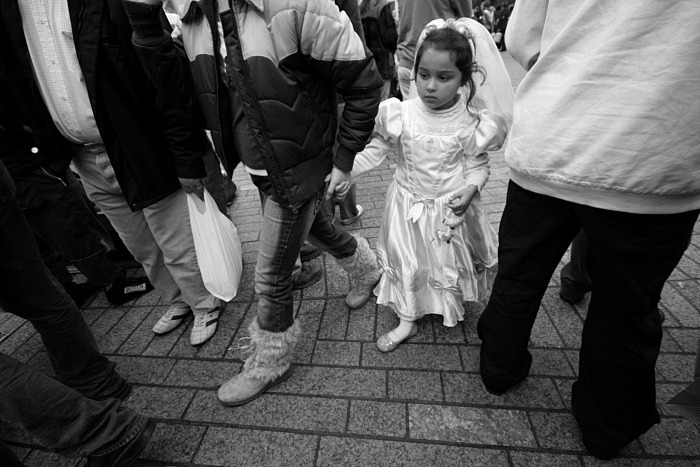 A girl dressed in a communion dress and veil walks with her mother through the crowds on St. Patrick’s Street Cork on Saturday. Dressed as she is, she looks almost lost but the crowd parted way for her and her parents.

I don’t know why she was dressed like that. First Communion ceremonies aren’t until next year. Is it a communion dress? Could she be a bridesmaid or flower girl at a wedding?

Two of my photos may be entered into the Irish Photographic Federation’s National Shield as part of the Mallow Camera Club entry. They need fairly large prints which is a bit of a problem but of they’re suitable I’ll link to them in a few days. The competition will be held in Portlaoise on the 12th of November so I’ll be eagerly waiting for the results! I’m not the only blogger entering. Jonathan Hill is entering too!

Donncha, that is odd isn’t it and the mother doesn’t look dressed for a communion or a wedding!

This is superb. She just sits right out from the rest of the people in the crowd. Wonderful.

I love it – great shot. The direction in the image including your view point and crop adds a distorted sense of isolation to it. Fancy dress party perhaps? I think this shot will do well 🙂

Thanks! It could be a fancy dress alright. I hadn’t thought of that. Like Gavin, I love how she’s in a world of her own!

Jonathan – I haven’t entered this photo, but I linked here because I mentioned the competition, thank you for your kind comments anyway 🙂

Nice framing on this picture !

its rubbish. i hate it and the girl is ugly. the dress is manky. so discusting.

Wow, Tara – you got up on the wrong side of the bed this morning! Sorry you don’t like it but I have to disagree with you on every point – the girl and her dress are beautiful and angelic.

Thanks Jilly! She looked so unusual in the crowd wearing that dress. It’s nice to know where it came from!

The little girl is not making her communion or going to a wedding because my little girl has that dress. It is a cinderella dress (if you look close to the chest you will see cinderella)The dress is blue on the other side and inside out it is cinderellas wedding dress each side comes with acessories like the veil.So its just a costume from Marks and Spencers.

It’s not about the dress, it is about the feeling and atmosphere of the moment. I like it !!!