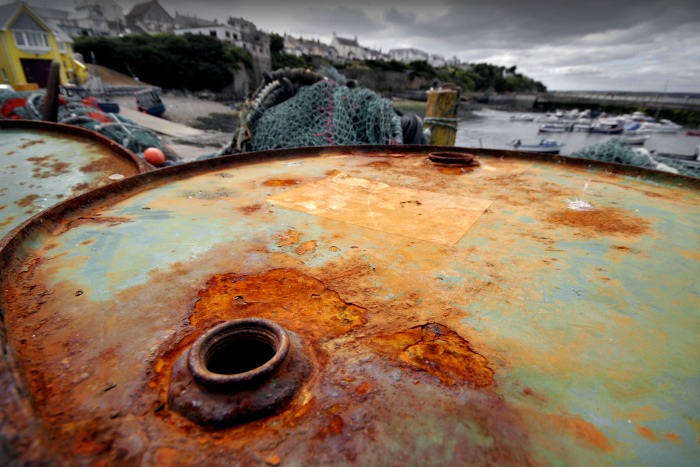 An old oil drum stands on the quay at Ballycotton rusting away as the exposed metal is beaten down by the elements.

Technique: I increased the saturation of the reds to bring out the rust of the drum. I desaturated other colours so the drum would stand out.
I then duplicated the layer and darkened the top one to bring out the clouds and sky before using a layer mask to expose the ground on the bottom layer. After that a simple gradient at the top of the image provided a nice dark effect and finally, I dodge and burned the rust until I was happy. Was that useful?

I used CocoViewX to view my work directory from my Linux box on my Macbook. I was surprised that Finder didn’t display thumbnails and I didn’t want the iPhoto heavyweight when all I wanted was to know which image was which.

16 replies on “Rusted and abandoned”

i love the angle.

and the forbodeing sky is a great backdrop.

Hi Donncha, its a brilliant photo. Amazing colours. Where was it taken??

Mary – it’s taken in Ballycotton. For the life of me I could not remember the name of the place. I had to ask Jess later and she figured it out as soon as I said “it’s the place with the lighthouse on the island” 🙂

I think the post process steps are good but then I usually do the same thing when I post photos, at least ones where I did something neat in Photoshop.

I like the wide angle, I think that it gives great perspective. Not to mention you really capture the texture of the rust very well. Score 9/10 (from the Score Me! group)

I like the difference in saturation between the foreground and background. Also very nice composition, not only artistically but every element supports the others – the drum and netting in the foreground go with the fishing boats, bay, and coastal town in the background. Nice!

This would be good for the RUSTY & CRUSTY pool!

Thanks Daniel for the suggestion, added it!

Hi, I’m an admin for a group called Oil Drums, and we’d love to have this added to the group!