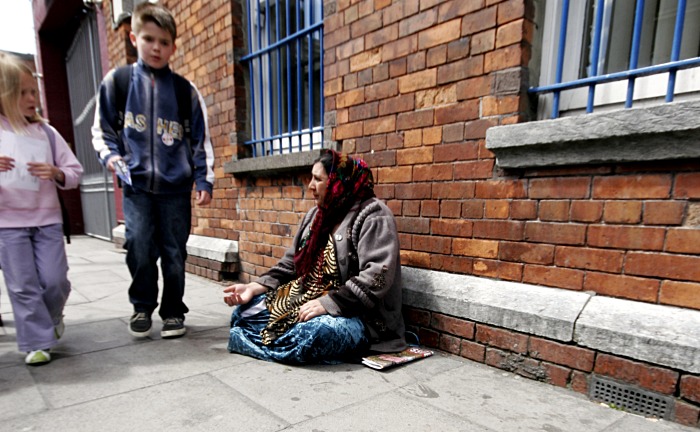 Children pass a Romanian woman begging in Cork. She is part of a growing group of gypsies who have come to Ireland as refugees. Unfortunately many of them have realised that Ireland is a land of rich pickings while their application for asylum is processed.

New laws have changed matters but Ireland is still an attractive destination. Statistics available from the Irish Refugee Council show a marked decline since 2002 however.

Ireland is or has been described as the, “land of a thousand welcomes” but you won’t be quite so welcome if you don’t have money to spend. Racism is as rife and widespread as elsewhere.

some homeless in cork are absolutly abusing of the system, there’s one on the bridge opposite the bus station who has a mobile phone !!! and he spends all day sitting there …

and look around, all homeless are smoking… strange… 6.35 for 20fags

i give money to jugglers and musicians, at least it’s like an exchange

i like your way of seeing cork by the way, good luck and carry on

they take the piss im homeless i beg cause i need to im in a bad situation trying to get out of it now a days its harder from these romanians have people sick of us irish i beg only at night 1 day a week to serve for the week but people see so many of us they get sick of it which they are right. these romanians have the best of houses and cars,so while im sleeping on the streets there in there cosy beds laughing with all the money they conned.

im 18yr old girl im homeless in cork city,these romanians are making it harder for the real homeless but they dont care,there children are forced to beg also. if i brought my boy begging social workers would be on the scene but for them who cares so they go back to there cosey beds while smiling how they conned poeple in cork while i sleep on the street.people are sick of seeing beggers which there right but thats y its hard for the reel homeless,people dont understand us any more there 1 non irish homeless person and he doesnt beg.

This is an amazing photo. Good work!

[…] This blog is listed on a few “do follow” listings and I caught someone this morning leaving a comment after they came here from a “site:inphotos.org” Google search. The comment is delinked […]

Now, what’s the difference between the begging gypsies and the irish travellers or just irish drunkers that are pissing in the middle of the street at 1 p.m.? It was a rethorical question, so don’t bother!!!