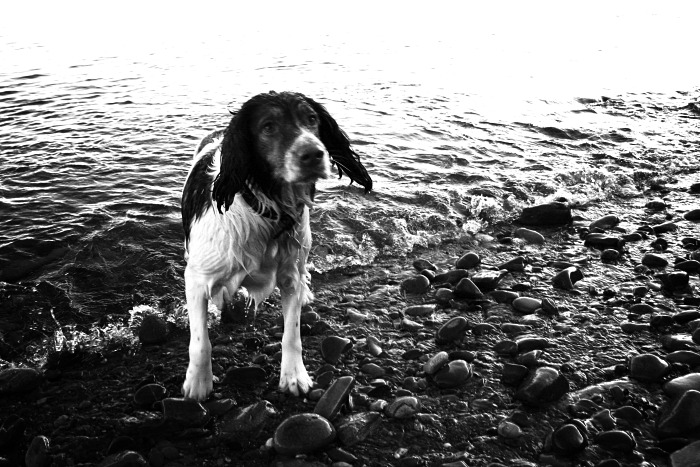 This is another photo of Ruby, a springer spaniel that lives in Myrtleville. This time she followed us over to Fennell’s Bay where she dashed off into the shallows after stones. She was deliriously happy!

Unfortunately the same could not be said for a group of teenagers higher up on the beach who threw stones at us and into the water very close to us. Their malevolent laughter spoiled that moment for us and put us in real danger. They weren’t locals and by their accents it wasn’t hard to figure out where in Cork they were from.

There’s more of Ruby here and here. We were down in Myrtleville last weekend and didn’t see her at all. I hope she’s ok and was tucked up at home in front of the fire instead of at a cold and wet beach.

There’s definitely something up with Flickr’s “Blog This” function. The URL of the image it passed to my blog was borked and displayed the infamous, “This photo is currently unavailable”. I reported it yesterday but I guess it’ll take longer than that to fix.

The ever vexxing question of privacy arrises on Kevin’s blog here and here. In the USA it’s perfectly ok to use someone’s image for non commercial usage as long as the photo was taken in a public place. I can understand why that woman is suing Yahoo! but I guess it’s the money she wants rather than protecting her privacy. (Is there a difference?) I covered the issue in the past, where things could be a little different in Ireland – the expectation of privacy extends to a private conversation in a public place. Vexxing indeed!

The Digital Photography Show interviewed Bert Krages, the author of the PDF, The Photographer’s Right on the subject of photographer’s rights. I haven’t listened yet but it should be good as he knows his stuff. Obviously laws will change from place to place so do some research locally before shooting on the street! The interview is also mentioned here and here. 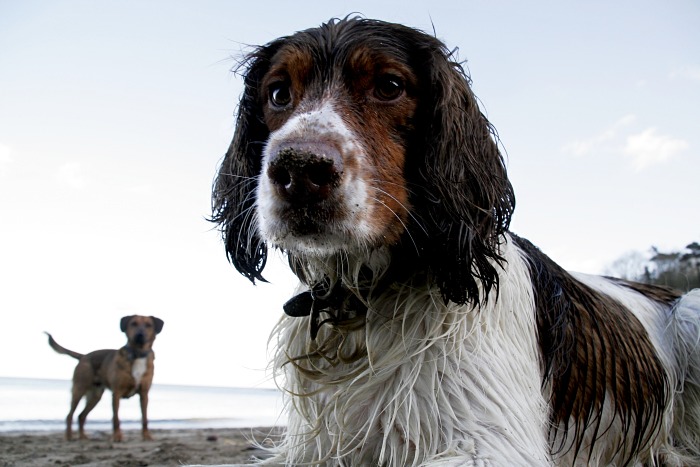 Ruby on the beach

Ruby, a Springer Spaniel we met last year in Bunnyconnellan, is still down in Myrtleville! Her owner must be living down there somewhere. We threw a stick for her a few times and then walked over to Fennell’s Bay and she followed us with her tail wagging!
It was a pleasure walking with her only spoilt by the idiot teenage girl who threw stones at us from high ground. She and her group of friends didn’t hang around when they saw us returning back towards them. Very brave.