As luck would have it, one of the more famous or perhaps notorious photographers of our time, Spencer Tunick, is shooting in Blarney, where I live, tomorrow morning.

Update on Jun 8th, 2009 – I’ve justed posted a small gallery of Spencer Tunick photos as his website is down.

It’s no great secret now, even Ray D’Arcy revealed the location on his radio programme this morning. He’ll be revealing a lot more in a few hours time.. Anyway, it all happens very early in the morning, at a time when most sensible people will be snuggled up in bed and that probably includes me. If I do feel the urge to visit Blarney Castle at dawn I’m sure all I’ll photograph will be groups of dazed and tired volunteers stumbling from buses, full clothed. I have no desire to shoot any naked skin.

Spencer – if you’re reading this, I’d love to go to shoot a portrait of yourself, and perhaps grab an autograph!

There are lots of people looking for Spencer Tunick’s Blarney photoshoot!

How did you celebrate your 30th birthday? I still am! I’ve hit the ripe ol’ age of 30 years and it’s come in the best year of my life. The last few days have been very exciting and ending my 20’s by going to the Us book launch party was the perfect end of one decade and the start of another even better one. The party doesn’t end yet, roll on the weekend! 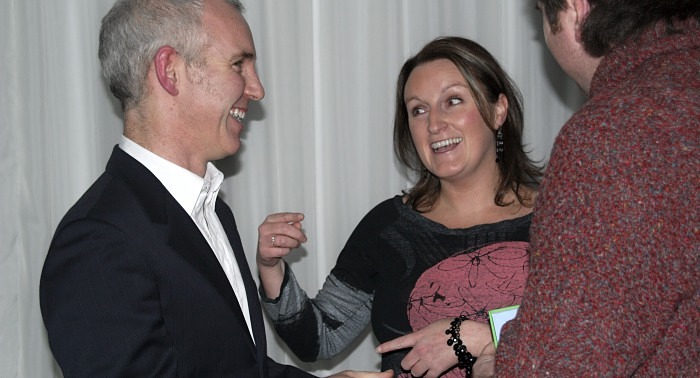 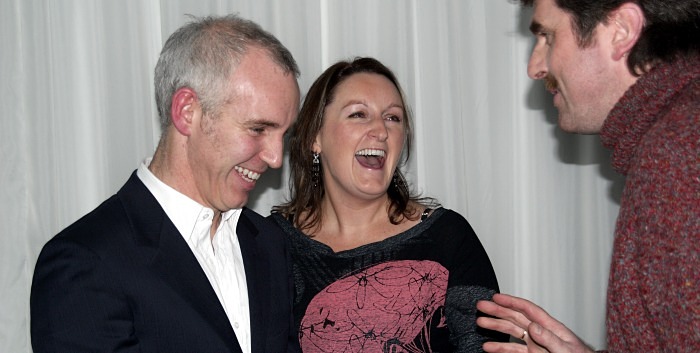 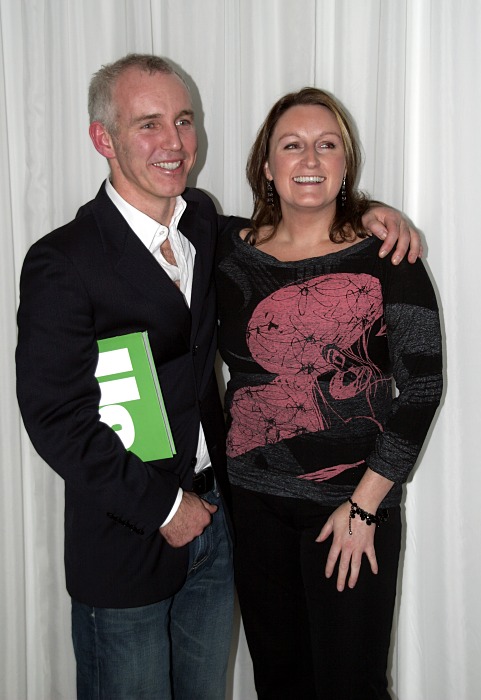 It was long speculated that Ray and Jenny were an item, and people wondered, “why aren’t they together?” Last summer they announced that yes, there is a romantic link and it was plain to see last night! 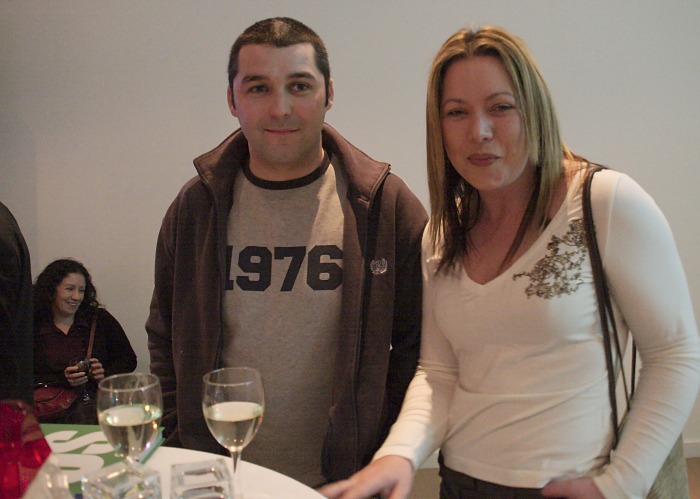 Dave and Deirdre were another couple invited to the party because they contributed in a big way to the book – Dave came up with the name!
There’s a camera phone picture of Dave in the front of US, taken by Deirdre, but here they are in a slightly clearer picture! We had a greattime chatting to the two of them and I signed their copy of US. I wonderif that’ll be worth something in the future?
There is some noise in the photo because light was terrible and I shot at 3200 ISO. I should have used the flash but them’s is the way! 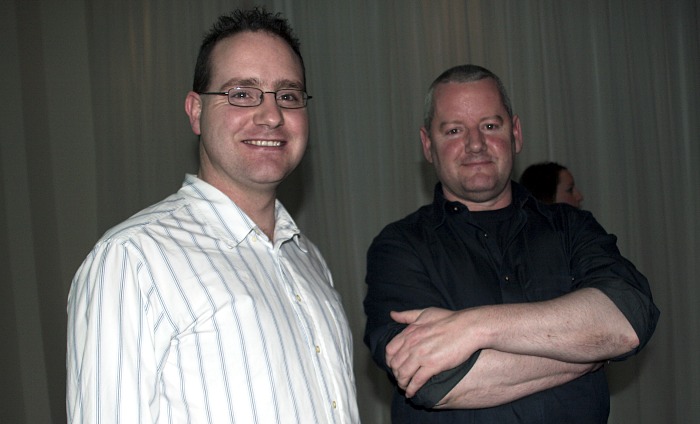 Dermot Heaslip is the chief designer behind the book. It was his idea that “US” be called “US” because, well, the book is about us isn’t it?

He was responsible for designing the book, and laying out the photos. When you look through it, it’s obvious that a lot of thought has gone into the organisation. It can be as simple as displaying baby photos on a double-page spread or the complexity of surrounding clothes and shoes with pictures of people and activity.
He did a great job! 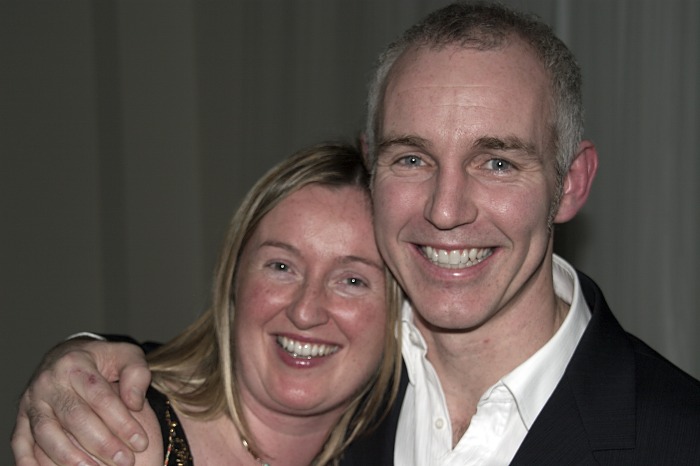 My fiancée, Jacinta, has been a huge fan of Ray D’Arcy’s for years and if it’s possible, she was more excited about going to the book launch than I was!
Sometimes it’s not a good idea to meet your heroes or people you admire because they’ll only disappoint you. Ray’s easy-going and confident manner from his radio programme comes across as soon as you meet him and we were not disappointed!
Nice guy and a gentleman. 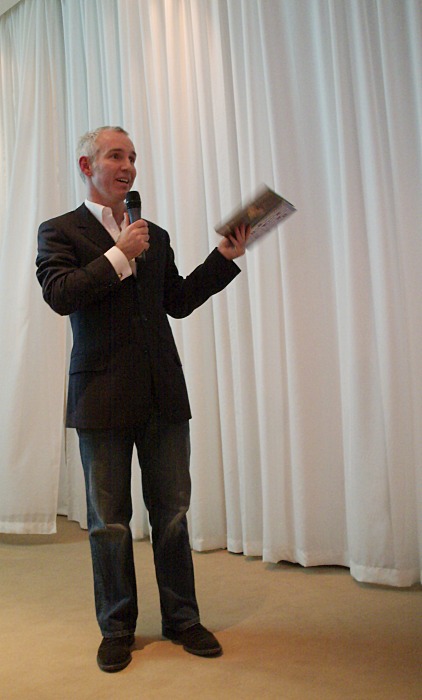 Ray thanked several people, although he forgot to thank Pat Balfe which he rectifed the day after on the radio! I was flabbergasted when he mentioned me, i’m sure I went red, but I know I had a big smile on my face!
I had a great chat with Pat, but unfortunately didn’t get a decent photo of him. 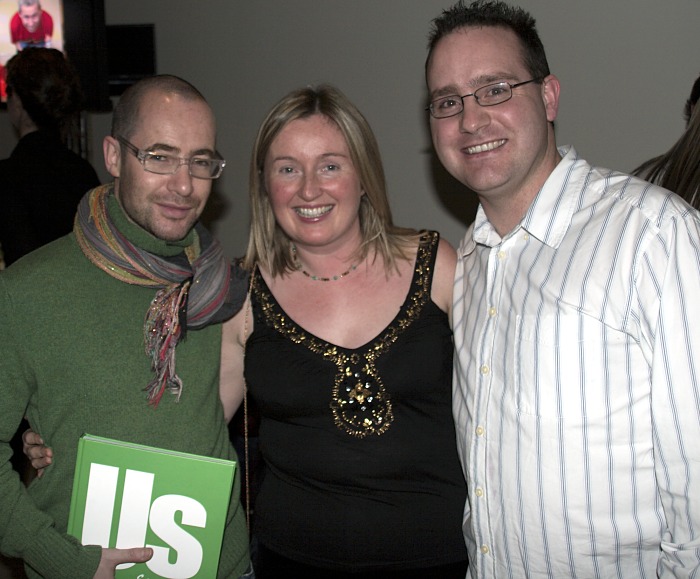 I had the pleasure to meet the not so world weary Quenten Fottrell! I didn’t recognise him at first but he introducted himself and we spoke at length and I even signed his copy of US for his niece!
He’s an interesting character, has a lot to say, and a good listener, although I think he was collecting material for a future article.. I’ll keep you posted on that. 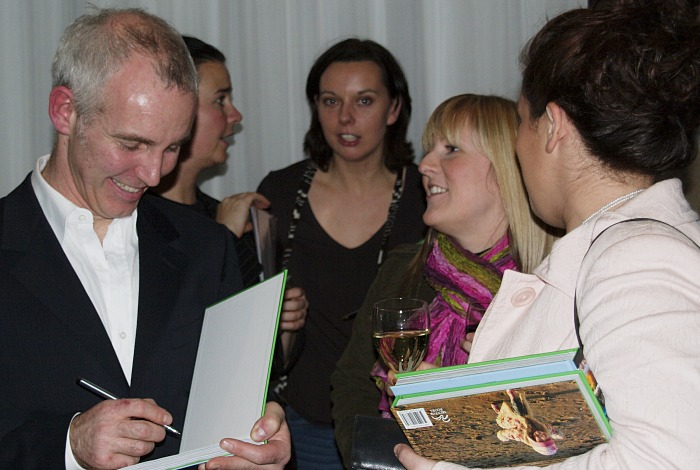 Ray spent a large part of the evening signing books!
I still don’t know why I didn’t buy a copy and ask people to sign it. Oh well!

Jenny and Mairead are part of the team that make up the Ray D’Arcy show.
I didn’t see Will anywhere! Sorry Will, Jenny and Mairead are much easier on the eye but I would have got a snap if I had seen you!
They were as friendly as Ray, and quickly posed with Jacinta as we were the last out the door!