The North Cathedral in Cork City as seen from the steeple of St. Anne’s Church, or Shandon Bells as it’s known locally.

Camden Quay in Cork City with the north side of the City behind it. St. Anne’s (or Shandon Bells) and the Catholic North Cathedral in the background.

Loved the light when I saw this scene. The setting sun cast shadows on the buildings and reflected off the church steeples.

The North Cathedral, Cork as seen from a window of St. Anne’s Tower or Shandon Bells.

The Cathedral of St. Mary & St. Anne, or the North Cathedral as it’s known in Cork sits right in the middle of this photo. It’s the city’s Catholic cathedral. A large portion of the north side of Cork City surrounds it. Blackpool is immediately behind it, and you can see the Heineken Brewery on the right where Murphy’s Stout and soon Beamish will be brewed.

This shot was taken yesterday from the tower of St. Anne’s Church, or “Shandon Bells”. You can see the huge shadow it casts on the green park and nearby houses! I will post photos from the Irish Blog Awards tomorrow. I’ve hardly had time to sit down today. 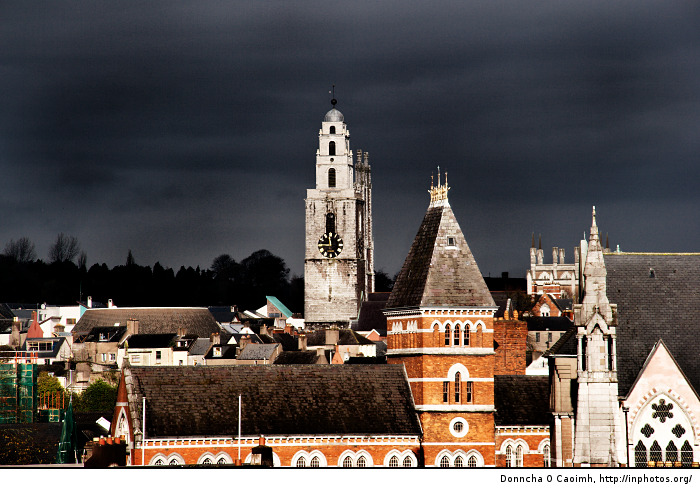 In this one single image are pictured several landmark buildings in Cork City:

The day I shot this was gloomy and overcast. Thick black clouds covered the city but for a few minutes a small part was bathed in light from a sun peaking through a gap in the clouds.

This was shot from the roof of the car park on the Grand Parade.

Oh yes, I’m toying with the idea of watermarking my images. I hate seeing an image destroyed by a name written over the actual image. A false bottom border and my details there might be a good compromise. It’s simple to remove but it’s one more step for a thief to take. What do you think?