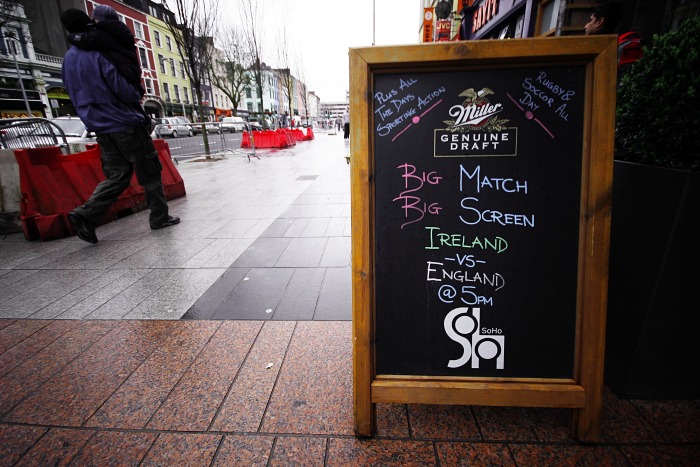 This was an historic occasion. Landsowne Road, where rugby and soccer matches are normally played is being renovated. Croke Park is the headquarters of the GAA, the native Irish sports of football and hurling. Playing “foreign sports” there was like someone desecrating holy ground. Not that that stopped American football being played there a few years ago. I guess some sports are more foreign than others. It literally took years for this to happen. I kid you not. Year after year, the issue of “foreign sports” came up at GAA meetings and it was only recently they allowed them in. Bravo!

Anyway, to pile insult upon injury, the first second rugby game there would be Ireland vs England. Republican supporters were up in arms during the week. “800 years!” “Bloody Sunday!” “1916!” “Black and Tans!” Imagine, “God Save The Queen” would be played in Croke Park? It’s hard to fathom but it’s all over now.

This is the closest I got to the match. We were in town, I wandered around a bit with my camera before heading home and watched a DVD, Eternal Sunshine of the Spotless Mind. What a wacky film. I loved it! Yes, I don’t have much of an interest in sport.