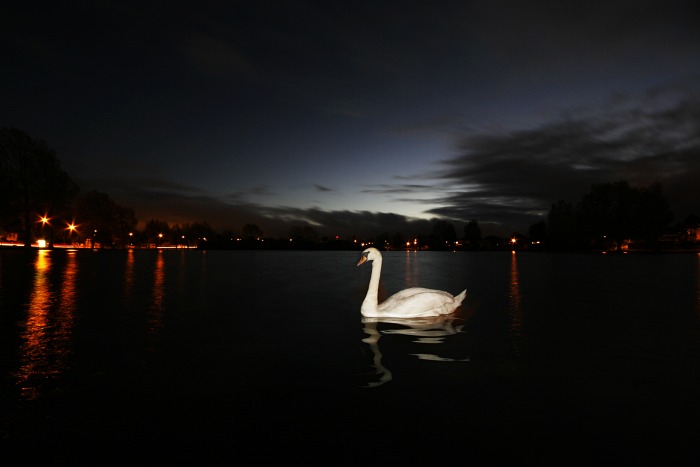 A solitary swan swims on the calm waters of The Lough as the sun disappears at the end of the day.

Believe it or not, this is a 10 second exposure that turned out much better than I could have hoped! I balanced my camera on the edge of the Lough, set it to Aperture priority mode at f/11, dialed the exposure down two stops, flipped up the camera flash and took the shot.

How does this work? 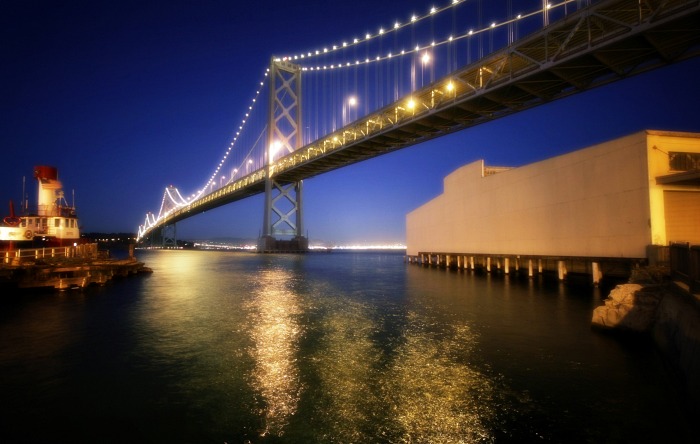 Light from the Bay Bridge in San Francsico shimmers in the waters of the harbour. To the left one of the fire fighting boats of the SF Fire Department can be seen.

Posting this landmark of San Francisco today as most of the rest of Automattic make their way to Mexico. Here’s another shot from another night near the bridge. 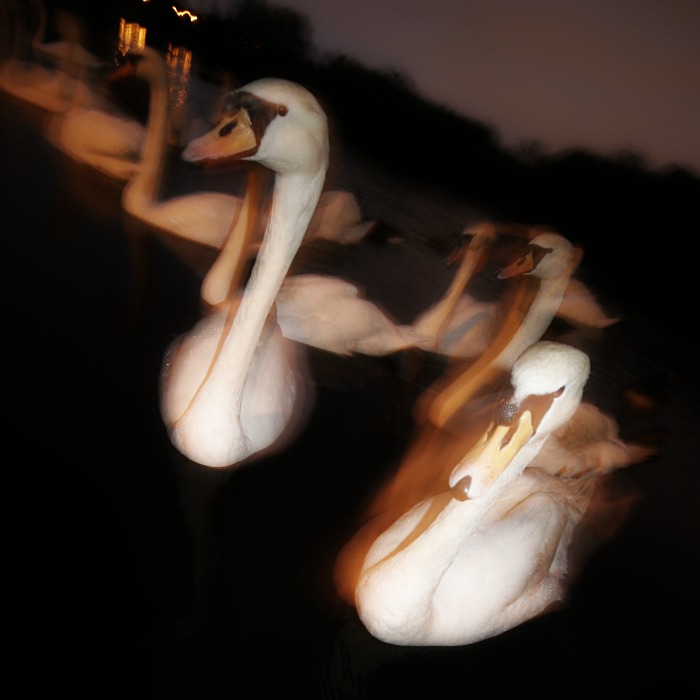 The swans they are a coming

This shows off one of my favourite night-time techniques. Long exposure with a flash. The long exposure captures the background while the flash illuminates the foreground objects, along with some nice movement blur.
It works really well at parties when people are dancing, especially if you’re lucky to capture a laughing face while the body is in motion.

Traffic along the Mallow Road hurries past on a cold and foggy December night. This was taken from the bridge near Rathpeacon and Killeens.

The bridge itself as you can see from the map above is much wider than the one in this picture but I wasn’t going to stand in the middle of a dark road at risk of being knocked over for my art. At least not this time anyway!

PS. Nominations for the Irish Blog Awards are now open. There are several categories and you can nominate your favourite Irish blog in whichever one fits. In Photos won Best Photoblog last year but this is the only time I’ll mention the awards here unlike last year when I did the dog on it a bit! (Not that I wouldn’t mind winning again of course!)

I like these: Snow Squalls! and Palm House – I wish more photoblog software understood trackbacks and pings. It’s hard to start a conversation with them.

Studs on the ground lead down to the traffic lights on the South Mall, Cork.

In this long exposure shot a couple of cars passed by providing a nice light trail in the background. The twinkling of the street lighting is from the narrow aperture. Setting the aperture as small as possible is definitely the best thing you can do when making long exposure shots at night.

This was taken while out with Mallow Camera Club last December. More to come from that night too!

Cork City Hall at night as viewed from across the river. It was all lit up for the Modern Homes Exhibition and as it was such a calm night the reflection on the River Lee was beautiful.

If you watch the RTE news at 6pm or 9pm tonight, watch out for the photo on the weather forecast. A friend of mine, Catherine Cotter, sent in a few entries to their photography competition and one of her photos will be shown tonight! I must set up the Sky+ to record it just in case. I might be able to get a screen capture somehow! 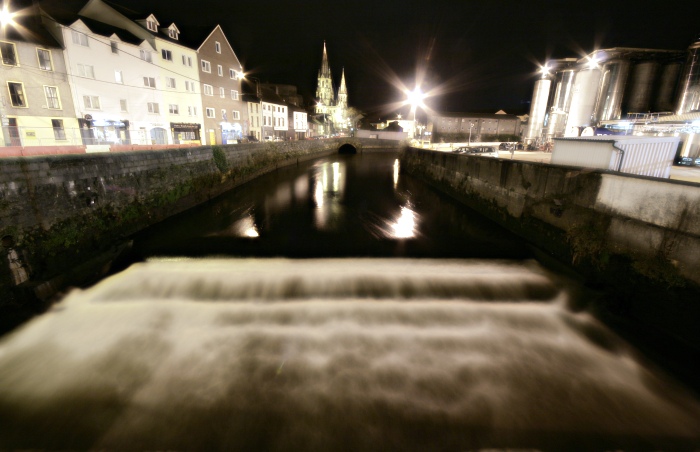 The River, The Brewery and the Cathedral

The River Lee rushes by the Beamish and Crawford Brewery on one side, and O’Sullivan Electrical on the other with St. Finbarre’s Cathedral in the background.

I have discovered there’s a dead pixel on my camera’s sensor. Fortunately it doesn’t seem to show itself much but when I take long exposure shots like the one above a little red dot appears in the top-right of the image. It’s easy to get rid of with the clone tool but also annoying.

The Wacom graphics tablet is great fun to play with but I haven’t got it working fully in Linux yet. Ubuntu thinks it’s simply another mouse device and GIMP doesn’t see it as an “extended device”. I spent quite some time on the Ubuntu forums trying to fix it yesterday before giving up and trying it out on a few images.
It’s a little fiddly to begin with, but I think that’s par-for-the-course when using a new tool. I do find that when dodging and burning large sections of images the brush can get stuck and won’t follow the cursor but I’ve read that once it’s properly configured performance is improved so I hope that is fixed then.

Hope you had a nice Christmas Day!

The Christmas lights in Mallow, Co. Cork illuminate the streets with a lovely cheerful glow.

A passing car provides another source of light in this long exposure shot on the main street of the town. 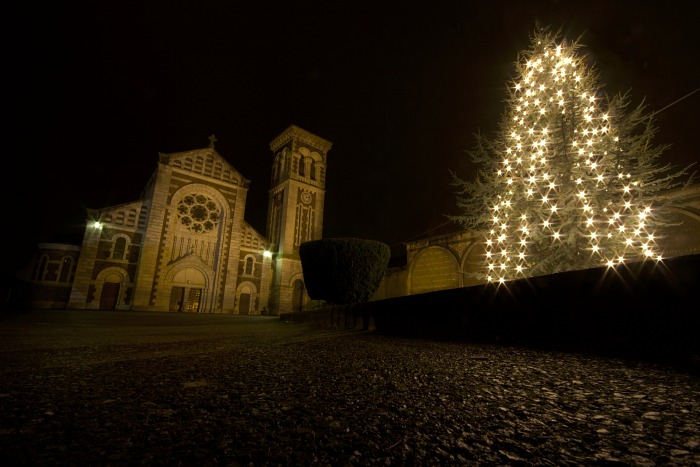 St. Mary’s Catholic Church in Mallow is lit up by the lights of the Christmas tree in the church grounds.

The camera club social night was in Mallow last night and after a great meal myself and Jacinta left the rest to prop up the bar! I had my camera with me and I got some good shots of the town and the church above.

It gave me the idea of writing an article about night shooting, so expect that in a day or two! 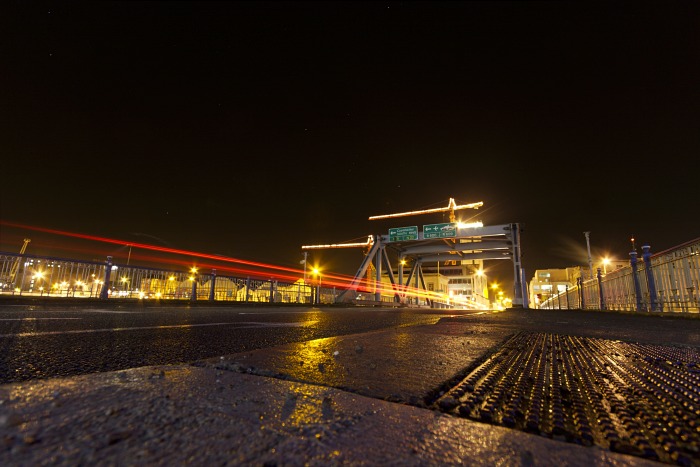 Clontarf Bridge in Cork City joins Lapps Quay to Albert Quay where the City Hall is situated. The construction cranes in the background are those at the site of the Elysian pictured previously.

This picture was taken on Monday night when several members of Mallow Camera Club walked the streets of the city taking photos of the streets and the people out on a cold December night. I didn’t have a tripod with me but there is enough street furniture to suit most circumstances and if not, then a wallet stuffed under the lens makes a shot from the ground more interesting!

Google Maps has a relatively good shot of the bridge if you’re interested!
I didn’t know the name of the bridge but this page came to my rescue. Thanks Blue Dolphin! 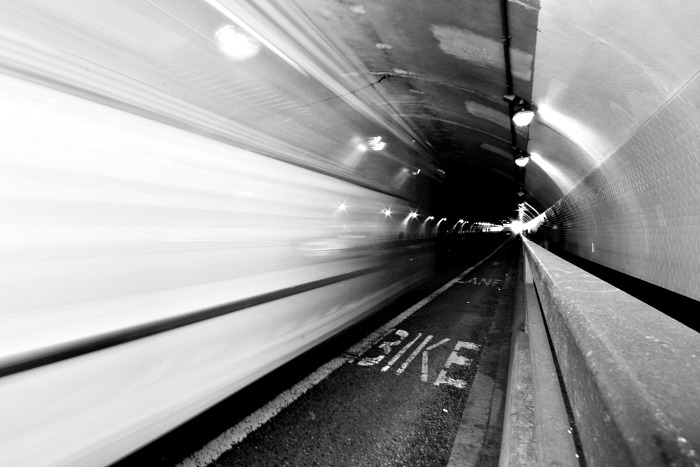 Riding a bike anywhere on today’s streets is almost a suicidal pursuit but bike lanes help. Here a bus drove past as I took this shot in an urban tunnel in downtown San Francisco. 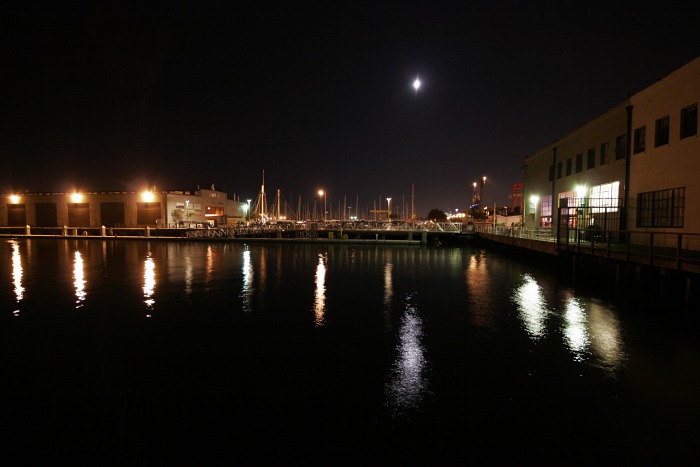 Pier 38 is where True Ventures have their San Francisco office. It was the location of a great post-WordCamp party last August. It was such a beautiful night I had to take a shot of the moon and lights reflecting in the water.