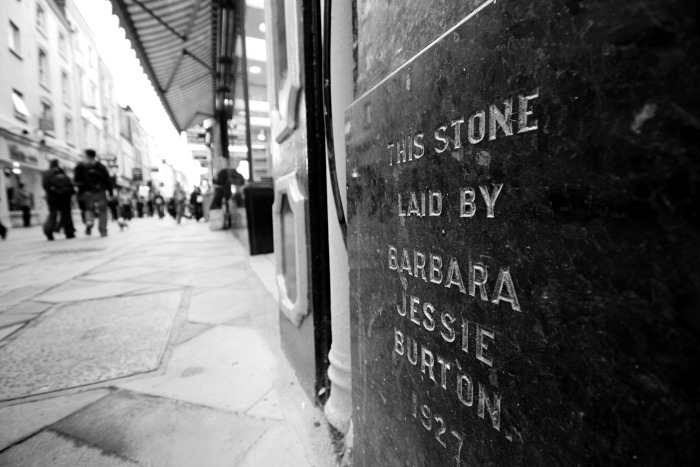 This foundation stone is set into a building at one end of Princes Street, Cork. I never noticed it until the day I took this photo and a quick search for Barbara Jessie Burton returns information and pictures of foundation stones laid by her in the years following 1927:

Does anyone know anything else about Barbara Jessie Burton?

I think she and her husband Stanley Howard Burton were the owners/directors of Burtons gentlemen’s outfitters who had several stores in the UK and Ireland.

carrigman – thanks! That’s a fascinating bit of history. I wonder who paid for the upkeep of the stone. Hopefully someone who knows will come by here some day and answer that one. Could be the council of course.

A similar stone is on ‘our’ Burtons in Taunton, Somerset – same name but laid in 1930.
It gets a mention o my Daily Photo Blog today.

[…] the stone laid by Barbara Jessie Burton in 1927, this doorway probably goes unnoticed by most people on Prince’s Street. It’s […]

I have noticed 2 stones in Glasgow one exactly as you describe but dated 1929 and the other on the oposite side of a tennament door way on dumbarton Rd Partick in Glasgow with the name Arnold Burton. I was trying to find the meaning of these when I found your site.

I am looking for some definite information about Montgue burton and his tavells through Nottingham and maybe some information on any family there may have been in nottingham if any. I believe this lady was in his family but have no idea about this stone.

Looks like she was Montague’s eldest daughter. A quick bit of searching yielded the following:-

From the birth index, it looks like these are the sons and daughters:-

Anyone know how he picked the name Burton when he arrived in the UK? There was already a tailoring family with the name Burton in the Nottingham/Chesterfield area in the late 19th century.

Does anyone know anything about the pre-existing Burton tailoring family mentioned by Tony Proctor above?

I am researching my family tree and believe my ancestors were tailor masters in Bradford (Yorkshire) throughout the 1800’s.

Any info relating to the original Burton tailors would be greatly received.

Info on Burton’s ancestry from DNB

Burton, Sir Montague Maurice [formerly Meshe David Osinsky] (1885â€“1952), clothing manufacturer and retailer, was born on 15 August 1885 in the town of Kurkel, Kovno province, Russia (now Lithuania), the only son of Chaim Judah Osinsky (b. 1825), bookseller, and his wife, Rachel Elky Osinsky. Of Jewish parentage, he was raised as Meshe David Osinsky by an uncle. He entered a Kovno yeshiva in his early teens, with the apparent intention of becoming a rabbi, but in 1900 emigrated to England thus escaping the escalating Russian pogroms.

The earliest details of Burton’s life in England reveal him trading from a small ready-made clothing shop at Chesterfield, Derbyshire, in 1904, using the adopted name of Morris (occasionally Maurice) Burton. A second shop was opened in 1908 at Mansfield by which time Burton, who had settled on the forenames Montague Maurice, had also acquired a small clothing factory in Leeds. In March of 1909 he married Sophia Amelia (d. 1957), daughter of Maurice Marks, a Worksop furniture dealer. They set up home in Sheffield and had one daughter and three sons.

…but no clues as to why he chose the name Burton out of all the possible surnames he could have had. I have done some reading since my last post and cannot find any hints anywhere. Maybe we’ll never know.

I haven’t got around to researching my Burton ancestors very deeply yet Hannah (I’ve been concentrated on other surnames so far), but I will do as soon as my work-load settles down a bit more.

It sounds like we may have some common links so I’d like to stay in touch if that’s OK. I’m at…

I have an antique engraving with a paper label attached to the backing of the framing which reads: “Burton the tailor of taste” & with handwritten to: Mr. White at: the Ark, Ampleforth? date: 70/5/63 Carrage Paid: post
Wondering if the co. did framing & how I might get info. of the date of framing also leading to the value of the engraving.
eh?

Hi
Here’s a few pics of the plaques on Dumbarton Road , Glasgow.
http://www.flickr.com/photos/felibrilu/tags/burton/

Thanks very much for sharing this information!

There is the same stone at the top of West Street in Brighton Sussex. My son and I googled to find out who she was and am fascinated there are others too.

Sorry, almost forgot to get back here. I’ve done a lot of work on my Burton side of the family Hannah. There were a lot of tailors – not just in the Nottingham area but Chesterfield and East Retford too. It’s very odd that Montague chose the same surname but I see no family connection with him at all.

Let me know if you want to confer about the Burton ancestors we may have in common Hannah.

Thank you very much, I found a similar stone in Mansfield just recently after living her over 50 years. I asked all over to find out who she was and finally the museum found out for. Another mystery solved. Thanks

Noticed one today myself and did a search and came across this forum…the one I came across was in Finsbury Park, London on the side of a McDonalds dated 1929

Just caught up with this thread. I am trying to locate Mr Arnold Burton who I believe is still alive. I have an inkling where he lives but would appreciate any help. The reason for wanting to contact him is that my family once lived next door to his co-driver on the Monte Carlo rally- he and his brother Raymond were rally drivers. His co-driver gave me the rally plates for 1964 and 1965 and I want to try and contact him so that I can find out why they never got to Monte Carlo. One possible answer is that there was so much snow in 1965 that only 36 drivers finished the course.Thank you for any help.

There’s a plaque identical to this in Church Court, Richmond upon Thames, on the junction with the high street. Says ‘This stone laid by Barbara Jessie Burton 1928’