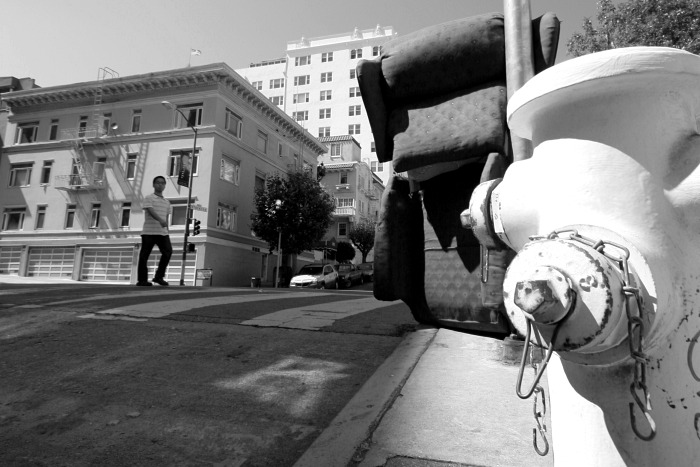 The couch on the street

A couch rests against a pole on a street junction in San Francisco. That’s a novel way of getting rid of unwanted furniture but I wonder who’ll pick it up? For all I know, it could still be there with a family of squirrels living in it.

The same happens everywhere. Here in Ireland bed frames, mattresses and other other furniture can sometimes be seen dumped by the side of the road, usually in the country away from the watchful eyes of the authorities.

John Harrington posts about cuts among staff photographers at major US publications. Not a good time to be working in the “old world media” in some places.

7 replies on “The couch on the street”

In the UK it’s called "fly tipping" – dumping stuff to avoid having to pay for it to be removed. Although I know, often people leave furniture outside their houses, and the binmen arrange for it to be taken and make a few bob out of it. Could be the same thing in San Fran. Still I like the idea of it becoming the urban equivalent of the rotting tree trunk, providing homes for lots of wee beasties.

Hi, Donncha – You say “Thatâ€™s a novel way of getting rid of unwanted furniture but I wonder whoâ€™ll pick it up?” Well, San Francisco has a big population of people who are struggling to get by, so I doubt that couch survived longer than a day. I routinely leave all kinds of stuff that I no longer need outside my house in the Mission district, and it usually disappears inside of an hour.

I just remembered something I saw while n the way to a scenic spot to look over the Golden Gate Bridge. After passing through a tunnel we drove past a small community of bungalows. Outside one of them wasa sign saying “Free Stuff” and some junk on the ground, unclaimed.
Not sure how long it was there, but the location is quite remote so they might have had a bit of a problem getting rid of the stuff!

In New York City, people put furniture out in front of their apartment to be legally picked up. I’ve seen HUGE items easily fit into regular dump trucks as part of their regular rounds. But usually, someone comes along to claim it and haul it off long before it gets taken away as trash. Many people also donate their furniture to service agencies who pick it up to be resold/used. Only items like refrigerators or air conditioners need special permits/stickers attached before then can be removed.

hee!
in most places in the states, you just put your trash on the curb, for free. it’s not actually dumping!

also, most place there don’t come furnished, so chances are, someone is grateful to find your old sofa. I loved spying out my window watching people take my stuff! the best was the old asian man that balanced my old love seat on his bike!!

I wish it were that simple in the UK.
To have that kinf of furniture taken away costs money, and that means that people dump their old chairs and sofas somewhere where they won’t be notice dumping them.

Sadly, all to often this means somewhere quiet and remote and rural – spoling the countryside for others.

I like to know were I dump a Old sofas. en van nuys , ca.
there are on good condition but I get new ones. and I don’t know , wthat to do with them . please. give some advise.
thenk you, lidia.