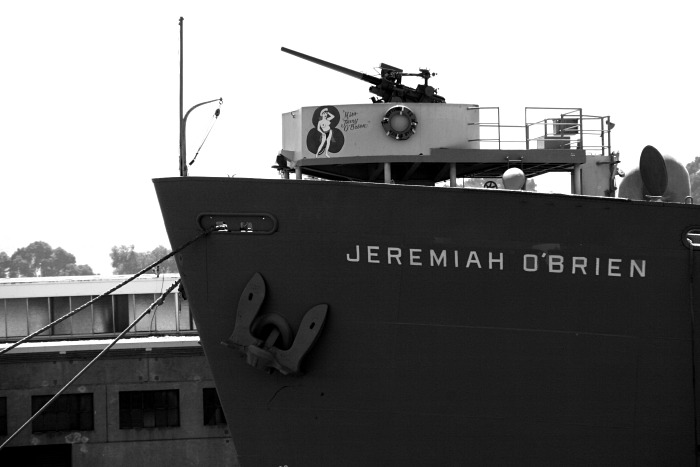 The Liberty Ship S.S. Jeremiah O’Brien lies anchored at Pier 45, Fisherman’s Wharf, San Francisco. It’s visible to all the tourists boarding the ferry to Alcatraz and is open to the public.

I didn’t get a chance to look inside, but ssjeremiahobrien.org makes me wish I did. She was one of the ships used in D-Day 1944 and made eleven crossings of the English Channel.

The small writing on the forward gun reads, “Miss Jerry O’Brien”. That looks like a shamrock behind the young lady accompanying the signature. Is there an Irish connection?

In June 1943 the Liberty Ship S.S. Jeremiah O’Brien slid down the ways at the New England Shipbuilding Corporation in South Portland, Maine. Shortly thereafter she entered service, operated by Grace Line for the War Shipping Administration. Named for the first American to capture a British naval vessel during the Revolutionary War, the O’Brien made seven World War II voyages, ranging from England and Northern Ireland to South America, to India, to Australia. She also made eleven crossings of the English Channel carrying personnel and supplies to the Normandy beaches in support of the D-Day invasion. After the war, she was “mothballed” and laid up in the Reserve Fleet at Suisun Bay, north of San Francisco.

nice shot and a great history.

Did you notice the picture painted on it? LOL!

Hi, I’m an admin for a group called AQUELLOS MAGNÃFICOS NAVIOS, and we’d love to have this added to the group!