Theobald Wolfe Tone, or Wolfe Tone as he is now known is immortalised in this statue in Bantry, Co Cork. (2008)

Bishop Lucey Park in Cork City was the location of a wonderful display of angel statues. They were decorated in all sorts of ways and even had one dedicated to Jedward!

Adam had a great time running around them, and had loads of fun playing with another boy named Nathaniel. They went crazy chasing around and screaming as loud as they could at the pigeons who had an unexpected bout of exercise!

There’s a statue of Christ and associated figures on the cross at the top of Slea Head in County Kerry. I’m not sure who erected them but they’re a prominent part of the headland there.

The O’Connell Monument in Ennis town is an impressive monument to Daniel O’Connell, a legend in Irish history.

THE O’CONNELL MONUMENT: This is an impressive Doric column erected on the site of the old courthouse where Daniel O’Connell was declared M.P. for Clare in 1828, an historic event which was later to result in the passing of the Catholic Emancipation Act. The statue of the Liberator with a shamrock scroll around the base was executed by James Cahill of Dublin and is considered to be his finest work. (source)

The O’Connell Monument. A lofty pillar with statue of “The Liberator” with inscription “On this spot in the year 1828, Dan’l O’Connell was returned M.P. for Clare. Proposed by O’Gorman Mahon. Seconded by Tom Steele”. “Maid of Erin” – or Allen, Larkin, and O’Brien Monument. Inscription “Sacred to the memory of Allen, Larkin and O’Brien who suffered death in Manchester through love of their country. Their last prayer being God save Ireland”. (source)

The statue of Father Mathew, the “Apostle of Temperance”, is a prominent landmark in Cork City. It’s at one end of St. Patrick Street looking north to the river. Some joker gave him a yoyo to pass the time..

The hippies were out in force in Bishop Lucey Park on Saturday as the new age folk made their presence felt at a “Peace in the Park” mini festival. I have to admit to being just a little cynical at events like these. Thankfully tarot readers or aura photographers were nowhere to be seen, although some guy was pontificating about what the “ordinary person didn’t know”, etc etc, and there was a Shell to Sea stall manned by a lonely girl clutching her baby. Even Frank was there and just as surprised as us by it. It wasn’t publicized at all.

Just behind the Onion Seller was a wigwam with people beating drums inside, and up at the other end near the fountain a stage was set up and music could be heard all over the park.

A comment on the Onion Seller post above makes the point that Bishop Lucey Park is not actually the same park as The Peace Park. I knew this park had been named after Bishop Lucey, but thought it was given the name, “Peace Park” as a nickname. This article clears things up. The Peace Park is on the Grand Parade, I presume down by the National Monument although there’s hardly any grass left there, if at all?

Ah, my wife Jacinta has the answer. It’s that patch of grass between South Mall and Grand Parade where there’s a monument to fallen soldiers (I think). It’s currently a building site which is why I had forgotten it. 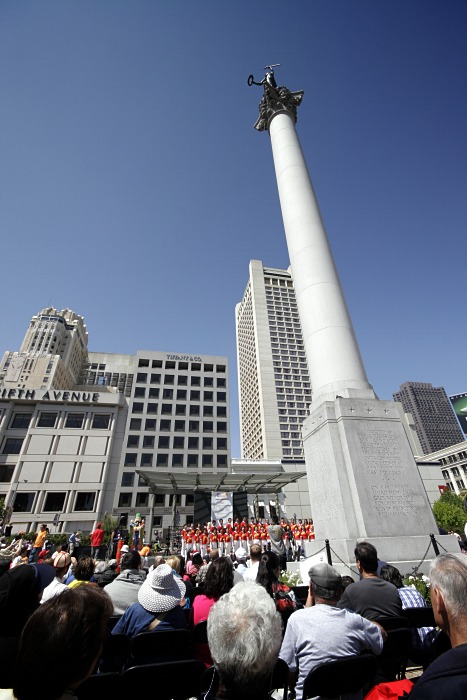 Looking up at Union Square

A festival or competition was being held on the beautiful August day we wandered through Union Square, San Francisco. It provided ample inspiration for photos although we didn’t linger long because we wanted to see more of the city.

The statue pictured is in the center of the Square and, “commemorates Admiral Dewey’s Spanish-American War victory at Manila Bay.” Here’s more and more on Union Square and the history behind it.

Department stores, Fifth Avenue and Tiffany & Co can be clearly seen in the background, it’s the center of the shopping world in San Francisco! 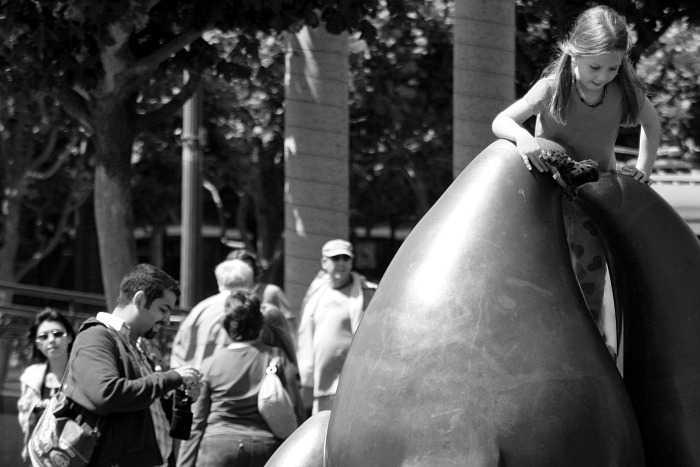 Playing with the sea lions on Pier 39

A girl clambers over the statue of two sea lions on Pier 39, San Francisco. This pier is where people embark on the journey to Alcatraz Island and it was packed with tourists. Luckily Toni booked our tickets a few days previously and we were able to walk straight onto the boat!