No, this isn’t the landfill site near the Kinsale Road, Cork. It’s the beautiful beach at Myrtleville in County Cork last Tuesday. Disgusting isn’t it? My wife met a friend there who said that last year 3 people would clean the beach each day but this year, because of cuts, only one person was available. Apparently that morning he had filled up three sacks after the crowds the day before.

What you don’t see here is the used nappy on the road above, the half full carton of rotting salad, the plastic bags and other rubbish. You can’t smell the acrid burning rubbish in an overflowing bin near the slip way. You also missed the Gardai who took away two inebriated underage girls who had been singing and staggering across the beach or the man who was manhandled to the ground outside the gate to Bunny Connellans and probably arrested by the Gardai who ran passed me. A typical day at the beach?

What the hell? What’s up with people? Are they that ignorant of their environment? I remember watching that episode of Mad Men where the Draper family have a picnic in a picturesque green park. Their shiny new car is behind them. Everything is spotless and neat. Then when they get up to leave, the kids are tidied but afterwards the parents toss their rubbish on the pristine lawn. I wasn’t the only one to notice. Great comments on that blog post.

Shame we haven’t moved on since the 60’s.

The Golden Arches of the McDonald’s logo taunts me from a paper cup discarded on the pavement on Grand Parade, Cork.

Old couches and mattresses lie in the building site that used to be Philip’s building on Cornmarket Street. Remember that big Philip’s sign on the roof of that building? I wonder if I have photos of that sign ..

When you’re stuck for time state the obvious. Yellow piping found on a back road beyond Crosshaven in Co Cork 9 days ago. That pink bike at the end of the frame was a nice bonus. Hadn’t noticed that when I took the photo!

Pancakes have been cooked, flipped and eaten by all and we’re heading out to see that Barcelona film that I can’t remember the name of in the Kino in Cork. Babysitter is here, Adam is tucked up in bed, time to run out the door.

A burned out car lies upside down next to the river in Inniscarra, Co Cork. I wonder if it’s still there?

Bits of a car that lay abandoned and burned out in Inniscarra next to the river.

Pobal ar Aire. Community on Alert. This is (was?) a scheme designed to help neighbourhoods help themselves by volunteering to keep an eye out for trouble makers or lawlessness. The local police are then informed.

It seems to work well, these signs are dotted all around the country, but in Bantry it looks like they’re protecting their beer.. 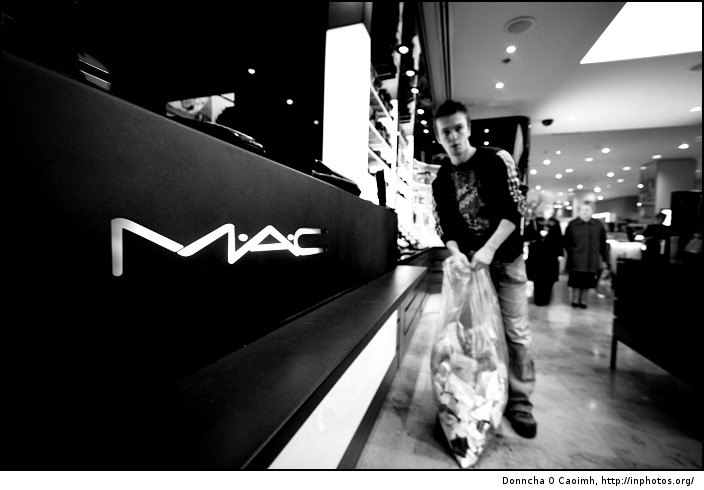 The MAC Counter at Brown Thomas

Hands up now lads. How many of you have waited around while your significant other picked out makeup or browsed the aisles in a department store?

This young fella was collecting the rubbish from the drawers and in contrast to the immaculately done up girls dressed in black he wore torn jeans and a cheap sweater.