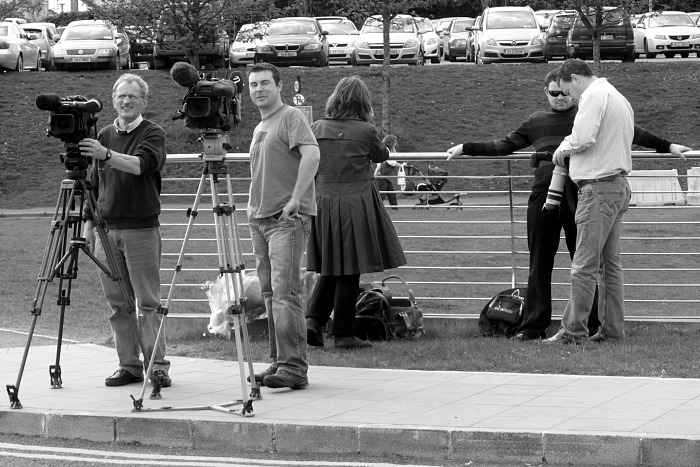 Paparazzi wait for Flatley at hospital

Film crews and photographers wait outside Cork University Maternity Hospital yesterday for a shot of Michael Flatley. His wife Niamh gave birth to a bouncing baby boy that morning in the hospital. Apparently Flatley gave a 5 figure donation to the hospital. Nurses I spoke to wondered where it went..

OK, maybe the people pictured are TV3, RTE news and a couple of photographers for the local paper but it’s not often one sees them about and in one place. I was busy helping Jacinta and Adam into the car and we weren’t about to stop and hang about. I told the reporters I had no comments to make except that Adam was in great form and that he and his mom were coming home.

I saw Michael Flatley on TV later and he was beaming! 🙂

RTE Radio 1’s Flux ran a programme on the treatment of a community following the death of a woman and her two sons in Firhouse, Co Dublin. last year.

Local community members were interviewed almost a year later by Flux to find out how journalists and photographers treated them. Some of the stories are shocking, others have been discounted as pure fantasy, and the newspapers are defended by a member of staff from the Irish Daily Mail.

I’m writing this from memory because the sound on my desktop box is broken and the sound on my Macbook is just too low for comfort. I used mplayer to record the stream using the following command, mplayer rtsp://streaming2.rte.ie/2007/0129/29012007rte-flux.rm -novideo -ao pcm. That dumps the realaudio stream to a file called audiodump.wav. I wish mencoder worked on audio streams…

It’s well worth a listen though.