I have just installed the hotlink builder plugin for WordPress. It provides a basic level of protection for the images on your blog from leechers visitors who come via Google and MSN looking for images. At least some of them are going to right-click on an image to use it in their own blogs, sites or myspace pages. This plugin displays a chunk of code they can copy and paste into their template or post to display the image. That code has a link to your blog which is much better than someone simply stealing your image and not giving credit.

It’s not perfect, but you can see it in action here. Right click on the image of the spire and James Joyce. A red bordered box will appear above it. Unfortunately if you right click on other images the box still appears in the exact same space which could be off-screen. I must try making it a popup div instead.

I also installed the small but useful break out of frames plugin. It simply breaks your blog out of foreign frames. Google Images is probably the worst offender of the referrers to this blog so hopefully it’ll encourage people to stay a bit longer here. Both plugins found via seobook.

Later… Some minor fixes required to make it work properly: 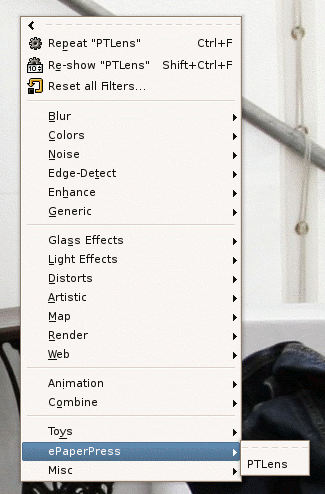 PSPI has long been the best way of running Photoshop in the Win32 version of GIMP. I’ve waited for a Linux version with anticipation and it has now been ported! Not all plugins will work, but I tried the trial version of PTLens and once I pointed it at the .dat file it worked perfectly, if quite slowly.

As well as the efforts to run Photoshop actions in GIMP this is a great addition to the GIMP arsenal of plugins and tools to aid photographers!

Need Photoshop plugins? This article reviews 10 free Photoshop plugins. I installed the Virtual Photographer one. It works quite well, although the preview window is a little wonky and don’t move the window or it won’t redraw.

GIMP#, a project to provide a “C# wrapper around the GIMP API” and that “enables users to quickly write new GIMP plug-ins using .NET or Mono” has had some exciting developments recently.

Maurits is working on a GIMP# plugin that will hopefully allow GIMP to use Photoshop actions. AFAIK, these are basically files with calls to Photoshop functions. They are self-contained programs using a Photoshop programming API to perform operations on images. There are a countless number of Photoshop actions for download, free, shareware and commercial, so having access to these plugins would give GIMP a huge boost in terms of what it can do.

There are problems, some filters and functions in Photoshop simply aren’t available in GIMP but he has managed to parse 25 filters from the action files.

Lots of actions map on a GIMP equivalent. I downloaded about 100 action files and created a top 25 of most often used functions. At the top are functions like Brightness/Contrast, Set Selection, Gaussian Blur, etc. etc. The first function without a direct GIMP equivalent is the Chrome filter.