A seagull on the pier in Santa Cruz, California.

This was taken early one morning on a sunrise photowalk with Marcus. It was so early I almost slept in and had to hurry to catch up with him!

Boats tied up on the quay in Bantry, Co Cork.

Cape Clear Island, or Oilean Chleire, is only 3 miles long and 1 mile wide, but it’s only 40 minutes by ferry to the mainland so it’s fairly easy to bring out vehicles. In fact, I saw many more cars on the island than I did on my last trip.

As you may have guessed by the photo above, once the cars get here, they really don’t go anywhere else, and many of them are in a bad state of repair. On a previous trip, my father and I were driven up a very steep hill above the harbour in a multicoloured VW Beetle that was literally falling apart with rust. I’ll post a photo of the hill in a few days.

There also isn’t a police force on the island. I don’t think cars here are insured or taxed and you can forget the NCT ..

Apart from the two taxi vans sitting on the quay when we arrived, the newest car was a 1999 model. The oldest was a 1986 Renault. The taxis were had 2004 reg plates and in good condition.

I’d love to how or why the van in the far background got to the Island. It looks abandoned now.

Naomh Ciaran II, the Cape Clear Ferry for many a year is still going strong. Here she is tied up at the pier in Baltimore, Co Cork, Ireland. The last time I boarded her (probably 15 years ago) and travelled to Oilean Cleire she was painted green and white, but it seems she has had an eventful history since then.

Traditionally, for many years up to 2001, the provision of a ferry service to Cape Clear Island was handled directly by the State. The State (The Department of the Gaeltacht) owned the vessels that were in use – Oileán na nÉan and the Naomh Ciarán II. The service was managed by a committee that comprised representatives of Cape Clear Island and the Department of the Gaeltacht.
In 2001, a decision was made to transfer the service to a private company – Naomh Ciarán II Oileán Chléire Teo – that had been established by the skipper of the service. A contract was agreed with this company and, as part of that contract, it was agreed that the State (The Department of Arts, Heritage, Gaeltacht and the Islands) would lease the vessel, the Naomh Ciarán II, to the company and pay an annual subsidy of €104,126 for a period of 5 years, from June 2001 to June 2006.
As part of that arrangement, and under the terms of the contract agreed, the State made redundancy payments of €190,691 to the four crew members who were employed by the company before the transfer.
Unfortunately, the new company’s principal, who was skipper of the ferry service, died suddenly during the term of the contract. Comharchumann Chlére bought the company and continued to run the ferry service under the contract that was in effect 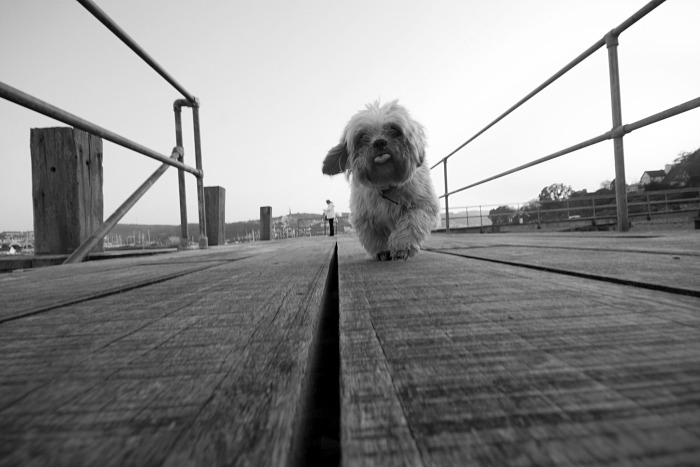 Imagine the scene. Out on a pier, I’m lying on the wooden beams over the low tide surf on the rocks below and I’m calling to my dog. Thankfully Oscar obliged and I made this photo as he walked towards me with his tongue half-hanging out of his mouth. There’s Jacinta in the background, she’s almost 9 months pregnant in this photo, but you probably can’t see the bump in this small image! 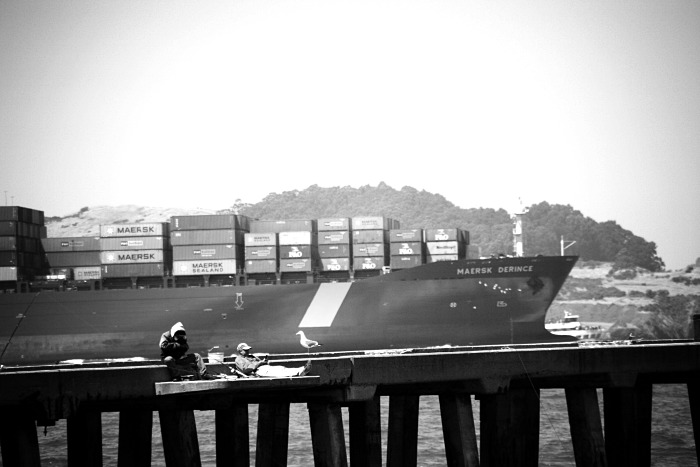 Two fishermen enjoy the sun while a huge container ship, the Maersk Derince, passes by in the background. You can see they’re very busy. Even the gull that has landed close by is watching intently.
It’s another hectic day in San Francisco.

Technique: I wasn’t sure what to make of this photo. I love the composition, especially the background to this sedentary activity. Unfortunately it was very misty and colours looked washed out. By converting to b/w and playing around with the exposure I think I produced an interesting looking photo. Finally, adding a vignette around the edges focuses the eye on the fishermen in the foreground. 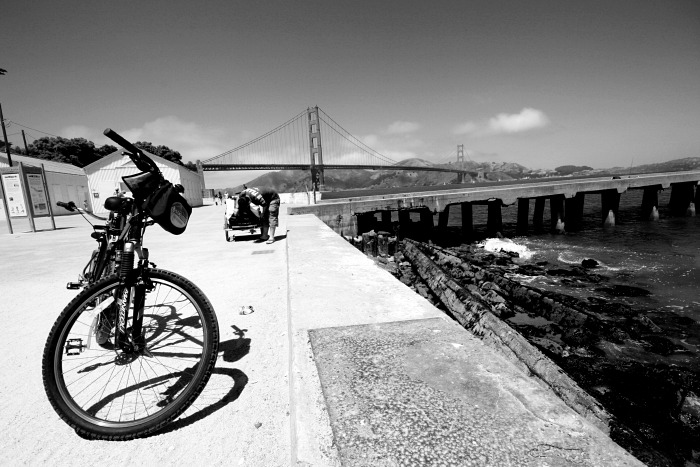 Have bike, will travel

As you can imagine, I was quite tired by the time I got to San Francisco!

Picture above was taken just down from my Bird flying by photo. I know there are lots of awkward lines in this shot but the line of the Golden Gate Bridge is just about horizontal.
Automattic had it’s first meeting of the week a few yards from here in the glorious sunshine. Some of us suffered sunburn but it sure beat sitting around some dusty old conference table!