Mushrooms growing in the wilds of the Galtee Mountains.

Clusters of mushrooms growing out of an old tree trunk by a small river.

Here’s one of my attempts at a mushroom photo, focus stacked from 4 roughly the same images.

This sort of photography is really hard isn’t it? You have to get down really low which is a problem itself if you don’t have a tripod to suit. An extension tube is a requirement as I don’t have a macro lens, and then trying to manually focus on the different parts of the mushroom is a challenge.

The focus assist in my camera really helped there. It shows dancing dots where the image is focused but even at f/14 it wasn’t enough to encompass the entire mushroom from front to back. Tap to zoom paid off a few times as it blows up the image to help focusing.

It was fascinating to see the focus dots move like a wave through the scene as I zoomed in and out. Yes, zooming in and out moved the focus point significantly! Significantly here means a few centimetres. Everything is small scale here. 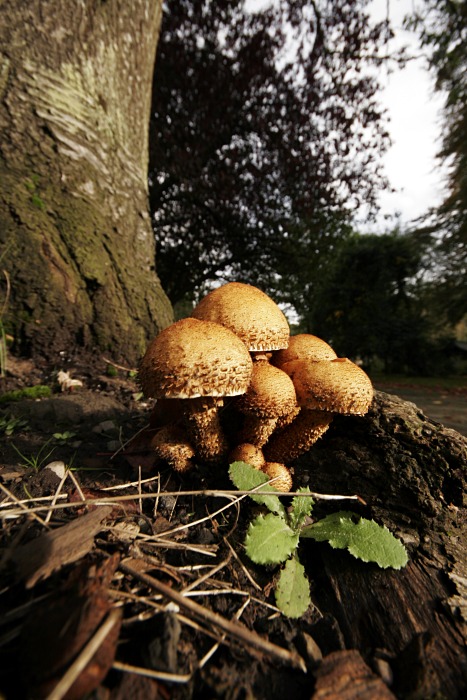 Mushrooms in the roots

Mushrooms grow from the roots of a tree in Fitzgerald’s Park, Cork. I just loved the colour and texture of the fungus, especially in the light of the sunset behind me.