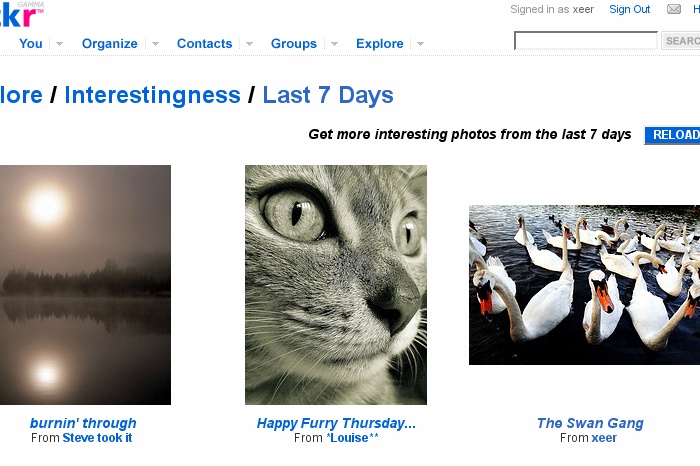 Making the top ten of Interestingness

The Swan Gang, a photo I posted three days ago, became the 4th most interesting photo on Flickr two days ago.

Nuggets of Gold
Flickr Interestingness uses a secret algorithm to decide what is interesting, but is biased against users who consistently get a lot of attention. Up until last month I would add my photos to many groups in the hope of attracting attention and eyeballs and yes, a number of my photos are in the interesting list but it was getting harder for me to get high results.
Last month I got married, took the month off and hardly touched a computer. Most of the photos published that month haven’t been added to any group so I think that helped me when it came to publishing this photo.

Groups
There are a number of photo groups on Flickr where members are encouraged to leave comments on the photographs of other users. If you look at my Swan photo again some of them are listed down the right hand side. That’s a good way of getting attention. Don’t even consider posting to these groups if you haven’t got time to participate yourself. For every photo you post, you may have to leave comments on up to 5 other photos. It’s extra work, but viewing other people’s work is inspiring and always a good way to improve your own technique.

Thumbnail
The thumbnail looks good. The swans have these bright orange beaks and are looking into the camera. It screams “Click Me!”

Time
I uploaded the photo to Flickr around 10:30am Irish time but I didn’t add it to any groups until much later in the day when the US is awake. I have consistently noticed that photos I add to Flickr groups early in the morning don’t build up the same number of views as quickly as when they’re posted later on in the day.

Links
One other factor that interestingness is judged upon is where traffic comes from. If someone links to your photos from outside Flickr like happened here that will help a lot. I have seen this a few times and each time it made a noticeable difference to how high a particular photo went.

Magic
And then add some Flickr magic to finish off!