On the ferry to Wales.

Another shot of the Electric Wires warning sign I posted yesterday. This one gives you a flavour of the landscape in the area, and the desolate, remote location of the sign.

If you’ve ever taken the Naomh Ciaran II to Cape Clear Island this sign will be familiar to you.

PS. The cheezburger are the latest blog to use the Thieving Duck. Hope they link back to the original post.
PPS. They did, saw a trickle of hits from there.

Naomh Ciaran II, the Cape Clear Ferry for many a year is still going strong. Here she is tied up at the pier in Baltimore, Co Cork, Ireland. The last time I boarded her (probably 15 years ago) and travelled to Oilean Cleire she was painted green and white, but it seems she has had an eventful history since then.

Traditionally, for many years up to 2001, the provision of a ferry service to Cape Clear Island was handled directly by the State. The State (The Department of the Gaeltacht) owned the vessels that were in use – Oileán na nÉan and the Naomh Ciarán II. The service was managed by a committee that comprised representatives of Cape Clear Island and the Department of the Gaeltacht.
In 2001, a decision was made to transfer the service to a private company – Naomh Ciarán II Oileán Chléire Teo – that had been established by the skipper of the service. A contract was agreed with this company and, as part of that contract, it was agreed that the State (The Department of Arts, Heritage, Gaeltacht and the Islands) would lease the vessel, the Naomh Ciarán II, to the company and pay an annual subsidy of €104,126 for a period of 5 years, from June 2001 to June 2006.
As part of that arrangement, and under the terms of the contract agreed, the State made redundancy payments of €190,691 to the four crew members who were employed by the company before the transfer.
Unfortunately, the new company’s principal, who was skipper of the ferry service, died suddenly during the term of the contract. Comharchumann Chlére bought the company and continued to run the ferry service under the contract that was in effect 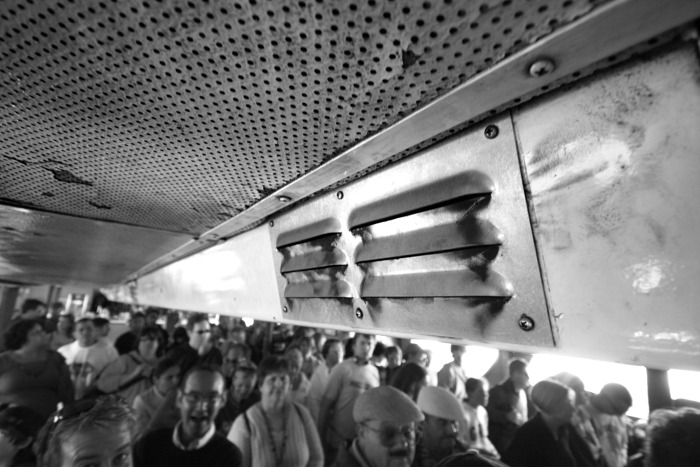 Many faces in the crowd

A crowd of Alcatraz sightseers prepares to disembark from the ferry back at San Francisco. From the expressions on a few faces I think they were wondering what that guy was doing with his camera held in the air!

I love the patterns in the roof and the contrast with the metal grill, you can’t take me anywhere that I won’t take a photo! 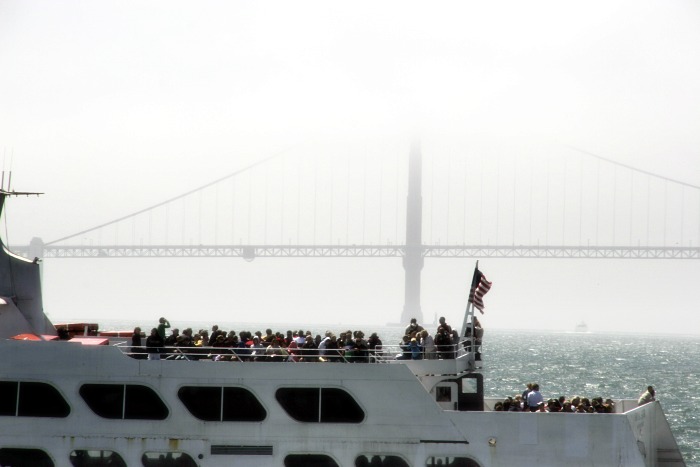 Tourists on a ferry pass by the fog shrouded Golden Gate Bridge
in San Francisco Bay.

The day was beautiful out near Alcatraz but fog covered the upper reaches of the bridge and I thought would make a pleasing shot.