An Fear Marbh, or “The Dead Man” in English lies off the coast of Co. Kerry. I posted another photo of the island taken on the same night as this one here, but it was such a beautiful evening I took quite a few shots! 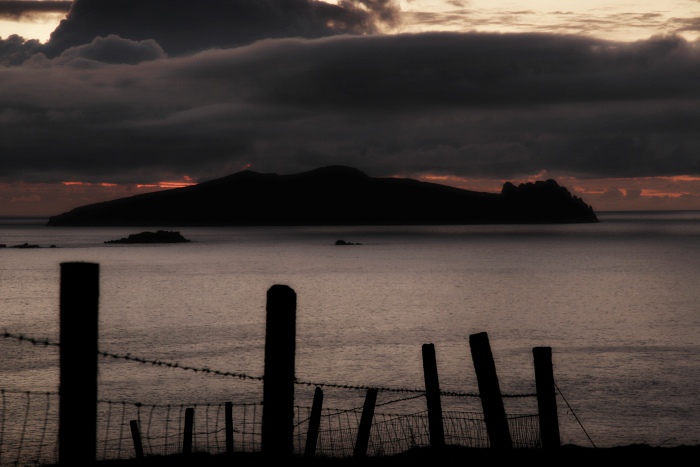 An Fear Marbh, an island off the coast of Co. Kerry, Ireland, with the setting sun lighting up the cloud over the Atlantic.

“An Fear Marbh” translates as “the dead man” and is so named because of the obvious shape of the island – that of a man lying on his back.
This was taken last September but because today is the Winter Solstice, and the shortest day of the year, I thought it was the perfect image for the day. Days will get longer now, little by little each day.

On the day this was taken we had dinner in Dingle. I watched the sun set and the light travel down the mountains near the Conor Pass. After eating, we quickly drove west to the coast to watch the sunset. Driving down a small road we spotted a car pulled over and someone standing outside watching the sunset so we stopped and got out. Turns out it was another photographer shooting the setting sun! We stayed there chatting for a few minutes before heading off. A few moments later the road turned a corner and this beautiful scene presented itself. I had to stop and shoot a few dozen shots.

Last night we called to the crib in Ballyvolane. Fr. James McSweeney has put together a wonderful crib with chickens, pigs, calves, goats, sheep, lammas, a pony, 2 donkeys and 4 young puppies. I’ll post a photo or two tomorrow, and the crib is definitely worth a visit if you live in Cork.
Visitors are asked to give a donation, and this year money raised will go to the St Patrick’s Church renovation fund. The crib is located 200 metres from St Oliver’s Church in Ballyvolane on Kilmorna Heights.
Fr. James has a photography site at Today is my gift to you.ie where he posts a new photo every day. I’ll be converting it to a WordPress blog in January when things quieten down again!