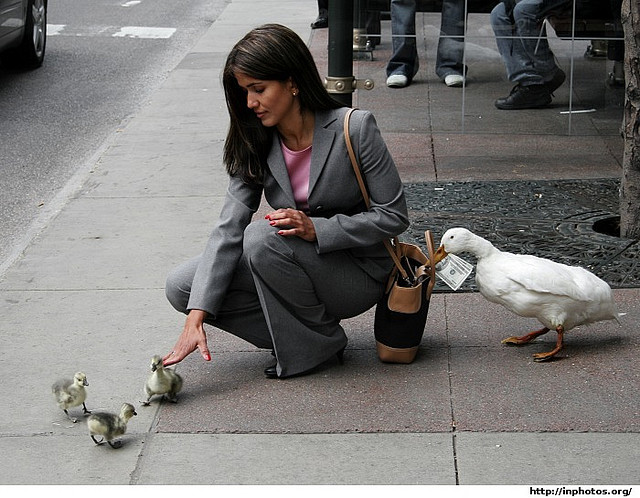 Construction work on the Trump Tower in 2005.

Marina City, the round shaped buildings in Chicago that sit on the river make an imposing sight when viewed up close. Good thing there’s valet parking, you certainly wouldn’t want to be scared of heights driving around inside them!

I’m reliably informed that many women enjoy the occasional trip to shoe shops and other establishments were garments and other finery may be purchased. Thankfully my wife isn’t one of them and hates shopping almost as much as I do. Nevertheless we found ourselves inside this shoe shop in Chicago so I decided to make the most of the moment and snap a few photos.

Despite being a major city, or perhaps because of it, Chicago has plenty of open spaces and broad streets. I love this shot for it’s wide open space bordered by tall buildings.

If the photo looks slightly odd, that’s because I used the perspective tool, but never dragged it the other way..

When I originally took this photo in Chicago (on La Salle, near the CBOT) it was a snapshot of a film crew. I took a few more shots of the crew but I was intrigued by the camera. Panaflex, what’s the specs on that then? Turns out it’s a product of Panavision, you know, that name that’s in practically every American film’s credits? Interesting history too although how they consider that big lump small enough to be handheld is beyond me!

In 2001 Donald Trump announced he’d build the tallest building in the world in Chicago, “Trump International Hotel and Tower”. After the attacks on the WTC in September that year the plans were changed however, but it’s still an awfully high building. Check out the Wikipedia page for further details.

This is the building site of the “Trump Tower” as it’s known locally. I shot this in 2005, and they’ve made quite a bit of progress since then as you can imagine, but this is a piece of history, and a patch of bare ground that won’t see daylight again for many many years.

Sears Tower is one of the famous landmarks of Chicago I photographed while in the city. Remarkably, despite the months I spent in the city, I never actually went to the top of the building. I almost did once, but turned back for some reason. Could have been the long line to get past security. Dunno.

Anyway, this is only the second shot of the building I’ve posted. The first, taken near one of the flagpoles pictured here was unusual and was fairly well received. This is a more traditional architecture shot, though I do like the flags waving in the wind!

Oh, my Canon 20D is still broken. On advice from Ryan, I’ll give Canon in the UK a ring, and I’m also on the look out for a Canon 40D. ac-foto in Germany sell the body only for €795 which seems to be the best price I’ve found so far. Prices in Ireland are around the €1,200 mark. Ouch. Where would you buy a DSLR? (that’ll ship to Ireland!)

Many cites live and depend on rivers and none more so than Chicago which went as far as to reverse the flow of the Chicago River! Wikipedia has more of course.

The observant visitor will notice the twin towers of Marina City in the photo above, and possibly recognise the distinctive bridge from the latest Batman movies.

Marina City in Chicago is made up of two 65 storey towers with a distinctive circular shape. I just love the look of them actually. They’re right on the river but this shot is taken from the L, probably on the Brown line after leaving Kimball which will be tomorrow’s photo!

As usual the Wikipedia page has a lot more info about Marina City including this bit about Steve McQueen:

In the movie The Hunter, “Papa” Thorson (Steve McQueen) pursues a suspect in a car chase through the Marina City parking garage. His quarry eventually loses control of his car and drives it off of a high floor of the garage into the Chicago River. This scene was later recreated for an Allstate commercial in 2006/2007.

PS. If I find the time, I’ll be taking part in Pink for October. Will has more info!

La Salle Street in Chicago ends abruptly in the Chicago Board of Trade at the far end of the street. It’s an unusual street because all the streets in Chicago just go on and on, mostly in parallel, through the city. This one just stops!

La Salle Bank which is barely visible at the left of this image is also in the background of The Dark Knight Batman movie.

The L is the elevated train system in Chicago and many films have been filmed underneath it’s tracks, including some scenes in Batman, The Dark Knight. Here’s the L under Kimball on the brown line. I worked close by a few years ago!